Could you tell me if there is a size limit on a single folder? For example, a folder with movies or music in it could end up with quite a few gigabytes! Is there a limit?

There are limits, of course.

The limit most people run into first is the size of their hard disk, but assuming you have a big enough disk, other limits can come into play.

I will say this right away, though: the size of the files in a single folder turns out not to be one of them.

More importantly, there are limits on individual file size that depend on what file system your hard disk uses.

A file system is nothing more than the specification of how files are stored on disk. In practice, it is generally synonymous with “format”, as in, it’s a choice made when a disk is formatted. Limits are one factor in choosing which disk format to use.

FAT, for File Allocation Table, is the successor to the original FAT12 file system that shipped with MS-DOS many, many years ago.

FAT32 was introduced to overcome some of the limitations of FAT16.

NTFS, or “New Technology File System”, was introduced with Windows NT, and is a completely redesigned file system now standard on most new Windows machines.

exFAT is an extension of the FAT file systems originally designed for embedded systems and flash memory. While not as rich in features, it’s somewhat more cross-platform compatible and lighter weight than NTFS.

Note that when I say “disk” above, I’m really talking about “logical” disks, not necessarily physical ones. This shows up in two ways:

For example, no one (currently) makes a 256 terabyte disk drive, but using these techniques, you can treat a collection of disk drives as a single logical disk. NTFS is particularly suited to this task.

Realistically, the size of your disk, or rather, the amount of available space on the disk, will almost always be the first limit you hit. 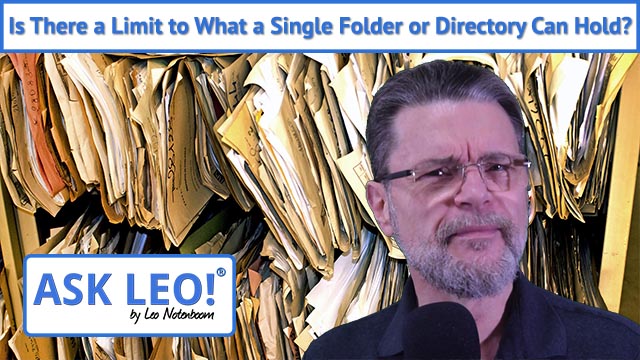 25 comments on “Is There a Limit to What a Single Folder or Directory Can Hold?”