There are many CD burning tools out there, including several popular free ones as well as several commercial ones. In fact, there’s a good chance you might have a trial version of on of the commercial products on your machine right now – they’re often included in the pre-installed software.

I use ImgBurn: it’s free, it’s lightweight, it does more than I’d ever need, and it’s relatively easy to use.

I say that it’s “relatively” easy to use, because its interface can be just a tad intimidating to the first time user. To overcome that, let me show you how to do a few common operations using ImgBurn.

This is what I do most often, by far. I use CD-R’s and DVD-R’s (write once media) to archive data and to send data around to others. It’s the most common and most compatible format.

Fire up ImgBurn, and if it doesn’t start with it, click on Mode and then EZ-Mode Picker… (or type CTL+ALT+P): 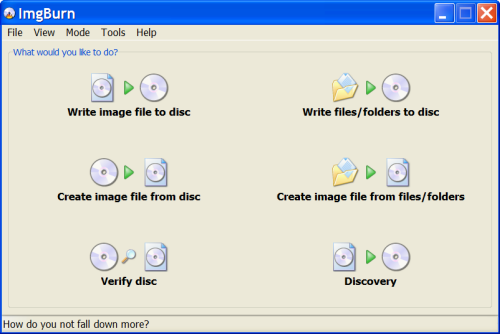 The mode we want to pick is “Write files/folders to disc“. This is how you create a data disk: 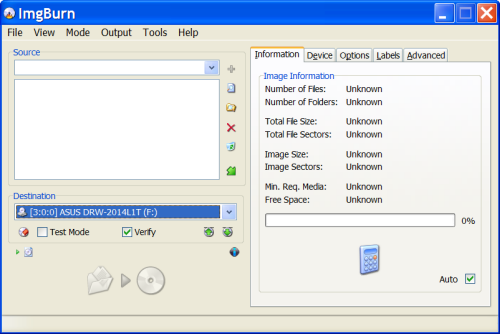 This is the screen that confuses most people, but the steps are actually fairly simple. Note the large empty white box on the left. That’s actually a file selection dialog. You can use controls to its immediate right to select files and folders to be placed in your disk, but I prefer another method. I simply open up Windows Explorer on the files I want to burn, and drag/drop them into the ImgBurn window: 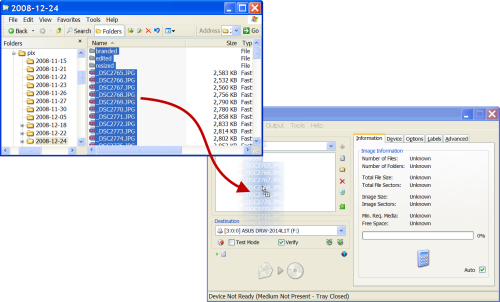 Note that I’ve included both files, and folders – whose entire contents will be included. 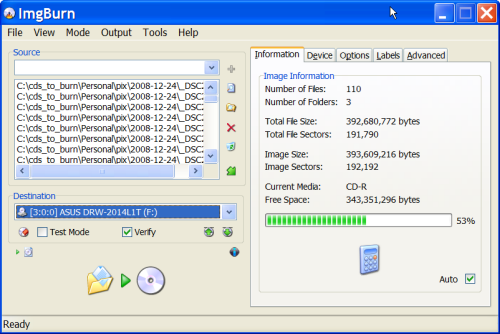 Note that because I’ve inserted a blank CD, that’s allowed ImgBurn to calculate exactly how full that CD will be. The calculator icon is actually a button that you can press at any time to recalculate the space that will be used.

By far the most common question next is “what now? how do I make it burn?”.

Push Da Button (that’s not all that obviously a button):

ImgBurn will then ask you to specify a Volume Label for the disc, and once you’ve done so it’ll start burning.

Burning an ISO File to Disc

That’s all normally behind the scenes stuff.

But what if you have an image file in the form of an ISO?

Go back to the EZ-Mode Picker… earlier, and this time select “Write image file to disc“: 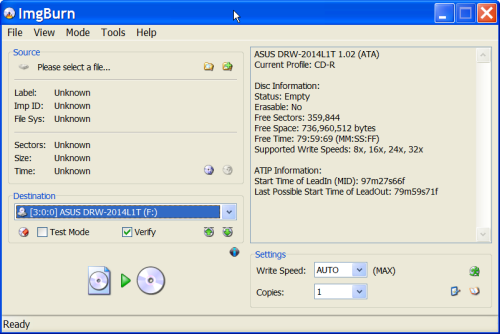 Once again the “what next?” question rears its ugly head. The solution, also once again, is to click on the correct button:

This then opens a file picker dialog box, and you can select the ISO file that you wish to burn to disc. Once you’ve done so: 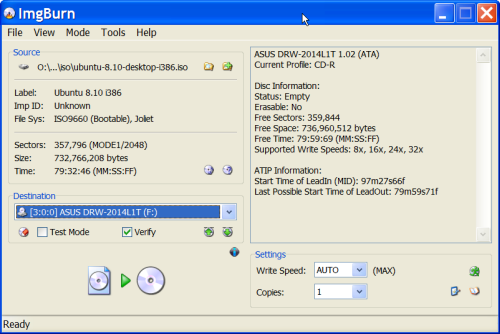 You once again click on the largish button on the lower left half of the ImgBurn window to begin the burn.

Other Options and Notes

As always, be aware of the size of the data you’re wanting to write, and whether it will fit on the media that you have. For example, if you have more files or folders than will fit on a single CD, then you may need to break the data up into amounts that will, or perhaps use a larger format such as a DVD instead. If you have an ISO that’s larger than a CD, then you have no choice: you need a DVD.

ImgBurn, as I understand it, won’t create bootable data disks (or if it does, it’s beyond the scope of this discussion). If you’re burning an ISO, and that ISO is of a bootable disk, then the result will be bootable.

As you can see from the “EZ-Mode Picker” you can also create image and ISO files from existing discs (a great way to backup a copy), or from a selection of files or folders.

ImgBurn will create audio CDs as well. There’s a How-To at the ImgBurn discussion forums.

Those discussion forums are worth mentioning as well, as they’re a good resource for not only FAQs and HowTo’s, but also serve as support should you have questions about ImgBurn.

The bottom line is that ImgBurn is a powerful and full featured CD/DVD and even HD-DVD/Blu-ray burning utility. If you’ve got the hardware to burn a disc, ImgBurn is worth evaluating as the tool to do it.