I installed Windows Live Messenger 2009 (aka Messenger 9) and it’s
not working for me so I want to uninstall it. Problem is it’s not
listed in Control Panel. Like others uninstalling Messenger 9 I’ve
deleted the files from the systems disk but whenever I try reinstalling
Messenger 8.5 it says that I’m still using 9.0. Should I give up and
just reformat my whole system?

I’ve been getting variations on this question a lot lately because
people can’t seem to resist installing Beta software. (Hint:
don’t – no matter what anyone says – unless you really
know what you’re doing.)

As with all Beta software, there may be problems and you may find yourself wanting to revert
to the previous version.

Except in this case Microsoft has done a nice job of hiding the
uninstaller. Yes, it’s there, it’s just not obvious. And no, a reformat
isn’t required.

The right way to install Beta software is to:

“… unless you really know what you’re doing, installing Beta software is asking for trouble.”

Beta software shares at least one characteristic with viruses: once it’s on your machine you don’t really know what it’s going to do. It will have bugs, and there’s no guarantee that uninstalling just the application, or updating the application to a later version, will actually work. If you read the licensing agreement for Beta software, you’ll typically find that they warn you about exactly this.

I know we don’t always follow those rules, and that’s one way we end up with systems that have problems and software that doesn’t work. 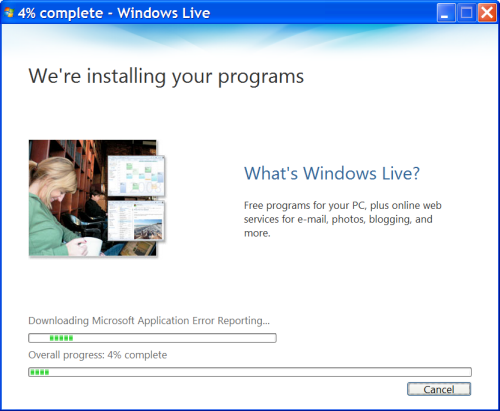 I don’t normally run Windows Live Messenger, so this was a good opportunity for me to download it and try it out. I was surprised at the size of the installation, and it quickly became clear that Microsoft was attempting to “bundle” a number of applications into a single installation. Yes, you could choose only one, like Messenger, but the download was still significantly larger than in versions past. That was my first clue. 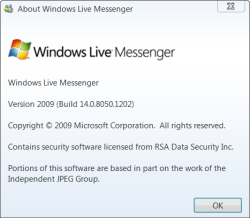 With Windows Live Messenger installed, I went to Control Panel’s Add/Remove list, and sure enough, it wasn’t there. But something else was: 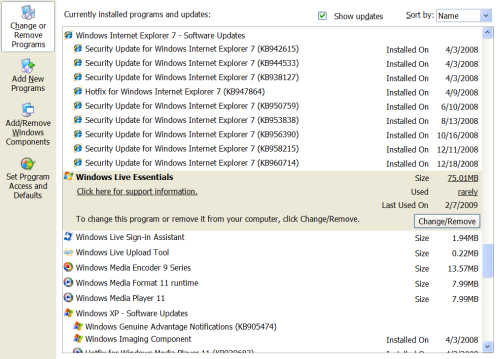 “Windows Live Essentials” appears to be the umbrella uninstaller for Windows Live Messenger and all the other Windows Live products you may have installed. Click on its Change/Remove. You’ll be asked if you want to Uninstall, or Repair a Windows Live program. Select Uninstall and click Continue. Then you’ll get the list: 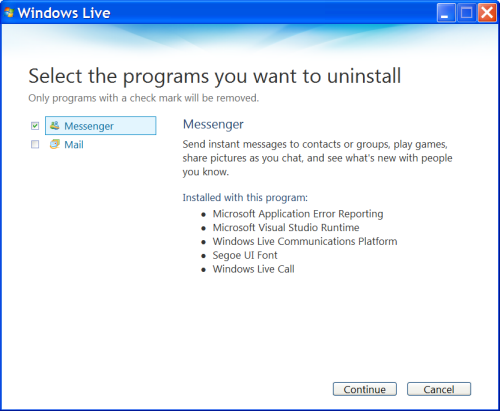 Make sure that Messenger is checked and click Continue. 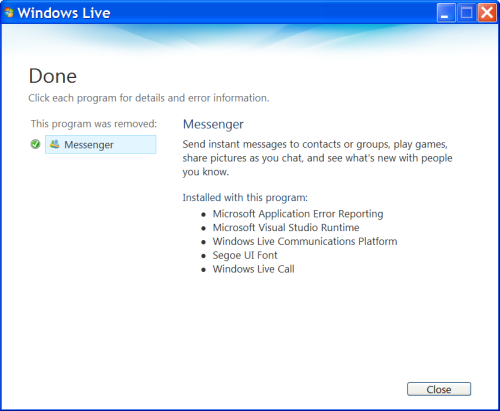 That’s it. Windows Live Messenger has been uninstalled from my machine, and hopefully now from yours as well.

Update: (02-Jan-2010) For those people who are still having trouble after following the instructions above, I’m very interested if the free version of Revo Uninstaller helps. It’s been known to uninstall things that have been having problems, but I’ve not seen enough feedback to know whether or not it’s working for this problem. If you have information, please leave a comment.

In addition, reader eddsn has provided a utility that some readers appear to be having success with: visit his site for more. (Disclaimer: use at your own risk, I do not know eddsn, and have not tried his utility myself.)

474 comments on “How do I Uninstall Windows Live Messenger?”