Am I actually using roughly 36 GB for these? And, if so, what if any
of these, can I safely delete?

Windows is trying to be helpful, and in the process is being
slightly confusing as well.

If you look closely at the contents of those three folders you’ll
find that they’re strikingly similar. Identical even.

And that would be our clue.


Here are two of the three culprits as shown on my machine in Windows Explorer: 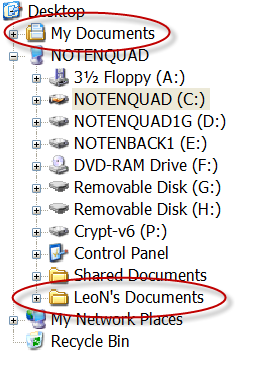 And of course, like you, I have “C:\Documents and Settings\LeoN\My Documents” as well.

So, no, in your case you’re not taking up 36 gigabytes, it’s only the single 12.9 gigabytes being reported in three different places. Delete something in one place and you’ll see it disappear from all three.

Good question. As I said, it’s Windows trying to be helpful.

“C:\Documents and Settings\LeoN\My Documents” is the official and correct location for the folder, but it’s also cumbersome.

“My Documents” is a convenient shortcut, nothing more. In fact, it’s something that programs can count on, so that they don’t have to know that when they’re on your machine it’s “Robert and Brenda”, and on mine it’s “LeoN”. They can just reference “My Documents”, and they’ll get the correct folder for the currently logged in user.

“LeoN’s Documents” is a little harder to rationalize, but on a system with multiple user accounts, each would likely have a named shortcut so that files could easily be exchanged as desired between users.

4 comments on “How do all these "Documents" folders relate to each other?”