I was trying to install software on Windows Vista Home Premium, but
it required admin rights. It’s an msi package, which doesn’t include
“Run as administrator” in the context menu. How do I install it?

However, it is what it is, and thus we need to find a way to work
around it.

The good news is that there are a couple of ways.

What most people don’t realize is that most files that have a
program association can be executed directly from the command line in
the Windows Command Prompt. “.msi” files are no different, and are
associated with the Windows installer. That realization gives us
perhaps the quickest and easiest work around to this problem. 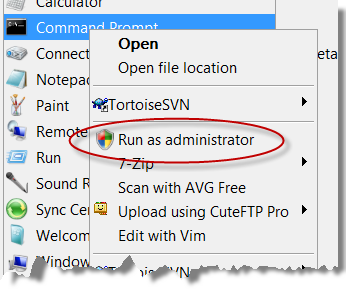 As you can see, “Run as Administrator” is present. After confirming
with the admin password, you can now use this instance of the Command
Prompt to run whatever you like. Including an MSI:

The command prompt may return immediately, but Windows Installer
will also launch in a new window, with the administrative privileges it needs.

I also have to be honest and say that I don’t use this approach.

For my security needs, the whole concept of confirming each time
that I want to do something as administrator is overkill. Hence, I
turn
off user access (or account) control in Windows Vista.

If I’m logged in as a user with administrative privileges, this
means two things:

Yes, this approach bypasses some of the additional security measures built into Windows
Vista, so use this approach only if you’re certain that it’s
appropriate for your situation.

But on the other hand, realize that this approach is no less secure
than logging in as an administrator in Windows XP.

12 comments on “How do I install an msi file that requires administrative privileges in Windows Vista?”