In Windows Explorer I know how to apply the current view (e.g., Details or
Tiles) to all folders. Is there a similar feature for the Office Open and Save
As windows?

As you note, in Windows Explorer it’s not that difficult to do, and in fact
I’ve discussed it in an earlier article:
How do I get Windows Explorer to display details by default?. While it’s
not obvious, it’s not really difficult.

File listing dialog boxes, on the other hand, are another story.

And Office? Another story still, but perhaps the easiest of all.

Many applications use a Windows provided library, called the “Common Control
Library” to provide their File Open and File Save dialogs. In fact, just about
any file selection dialog can be displayed using the Windows common
control.

One of the nice things about using a common control is that all the dialogs
look and act roughly the same. If you know how to use one File Open dialog,
you’ll immediately recognize the same dialog in another applications, or
similar dialogs like File Save because they’re all very similar.

The down side to using the common control is that all applications that use
it share the control’s limitations. In this case the ability to modify the
default display is such a limitation.

“There’s no supported way that I’m aware of to modify
the default common file display.”

There’s no supported way that I’m aware of to modify the default common file
display. That includes the size of the dialog, the sort order, or whether or
not to display details, icons or something else. The default is what the
default is, and you’ll need to live with it, changing the display by hand each
time you open up a new file selection dialog and feel the need to see things
differently.

The good news here is that from what I can tell Office does not use the
common control – or at least, not for File selection dialogs. With Word 2003,
for example, I was able to resize the open dialog, change the view settings,
exit Word and restart it, and the settings were preserved the way I had left
them. The change is a simple click on the Views drop-down
list: 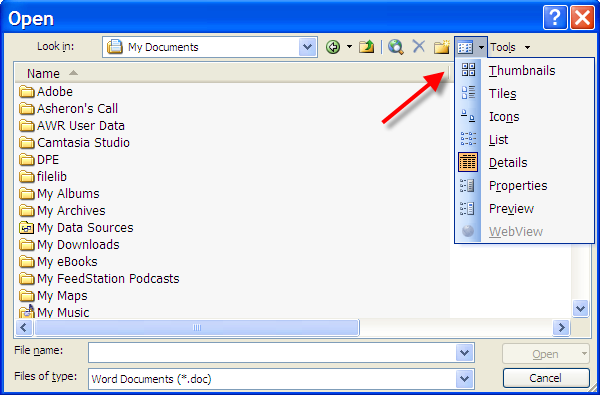 While we might wish that other applications worked the same way, they most
frequently do not. When you exit and restart the application, or even if you
just bring up the file selection dialog more than once, you’ll see it’s been
reset to the pre-defined defaults that you cannot change.

Now, there is a “patch” out there, but to be totally honest, it makes me
really uncomfortable.

ElmüSoft has something called
“Windows MultiEnhancer” which allows you to both resize the common File
Open dialog and display details by default. It works by actually
replacing the common control library with a patched copy. Naturally
that patched copy is not official in any sense of the word, and certainly
hasn’t been tested by the Windows QA team. If there are ramifications to the
patch – well, too bad, you’re on your own.

I’ve run it, and while the install warned me about some missing file, it
still seemed to work as advertised. Even better, the “Restore” function also
worked properly, restoring my system to its “official” behavior. (I believe
that running the System File
Checker may also “undo” this patch.)

I can’t honestly recommend unofficial system patches of this nature, but if
you’re desperate or daring, and you back up, it might be worth a
test.

And finally, while I haven’t tried it yet, this is such a common
request, I hope that Microsoft has listened and provided the functionality
we’re all looking for in the next version of Windows.

9 comments on “How do I get the File Save or File Open dialogs to show details by default?”