I do not use file sharing and had never heard of “MegaUpload.” I don’t have
any files on that site, but I had a thought: how do the innocent people get
their files back if their only copy was on that site?

There are a lot of lessons to be learned, as well as a fair amount of
controversy to be gleaned, from the closure of the file sharing site
MegaUpload.com.

One of the most important lessons is something that I’ve been preaching for
years.

Megaupload.com was a file sharing site. It’s primary purpose was to provide a place where large files could be uploaded and freely downloaded.

I’m sure you can imagine both legitimate and illegal uses for such a service. 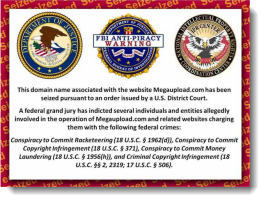 As a result of the alleged illegal use of the service to upload, host, and share copyrighted materials, such as movies and music, without the authority to do so, the United States FBI seized the domains owned by MegaUpload and effectively shut down the service on January 19th, 2012.

The use of MegaUpload wasn’t restricted to illegal activities. As a general purpose file-sharing service, it was used for many totally legitimate purposes as well.

Unfortunately, the closure did not distinguish between legitimate or illegal – the entire service was shut down and all files, legitimate or otherwise, were rendered inaccessible.

In fact, it’s unclear, but the data may end up being completely and permanently deleted. (At this writing, it’s unclear and a recovery plan for holders of legitimate content may be forthcoming. It’s just not certain if or when.)

People who’ve placed the only copy of their data on MegaUpload may quite possibly be out of luck.

We don’t even have to go into the legalities and ethics of the MegaUpload story to find a very, very important lesson from it.

And it’s something that I’ve been saying for years.

If your data is in only one place,
it’s not backed up.

I don’t care where you keep your important data – your machine’s hard disk, an external hard disk, DVDs in a bank vault, an online service like MegaUpload or something as simple as Google Docs – if you have only one copy, you are asking to lose that data forever.

Your machine can crash, external hard drives can fail, DVDs degrade over time, accounts get hacked …

And online services can disappear overnight.

I’ll leave the legalities of file sharing up to you, the specifics of your situation, and your conscience.

But whatever you’re sharing, keep a copy. Back it up. Don’t put all your eggs in one basket.

Especially when that basket belongs to someone else.

6 comments on “How do I get my files back from a closed upload site?”