Back in the “old days” (think before Windows XP) when you wanted to create
something to boot from you’d grab a floppy, format it, run the “SYS” program to
install the boot sector and a couple of basic files into the disk and then copy
whatever other files you wanted and you’d be done.

Life’s not so simple any more.

Mostly to prevent piracy, but also in part due to the shift to CD-ROM and
DVD-ROM, Windows can’t by itself be used to create a bootable disc.

Nonetheless I found myself in need of a copy of Windows I could boot from
CD-ROM. I wanted to use the backup program DriveImage XML. to restore a backup
image. That meant I couldn’t boot from the hard drive I was planning to restore
to.

I needed a Windows boot CD.

Before we start, here’s what you’ll need:

“By using your Windows files the process avoids any legal issues …”

It’s actually not terribly difficult once you have all the above.

“PE” stands for “preinstalled environment” – basically a bootable ready-to-go setup of Windows with all the tools and utilities you might want to use. Bart? He’s the guy that developed this very popular utility for building a PE, hence it’s the “BartPE”.

A BartPE is created by using the PE Builder to create a disc image comprised of Windows files from your original Windows installation, Bart’s pre-defined configuration, and several optional tools. By using your Windows files the process avoids any legal issues – Bart didn’t have to give you any copies, you’ll simply use the ones that are already legally yours.

When you run the PE Builder you’ll be presented with a single dialog: 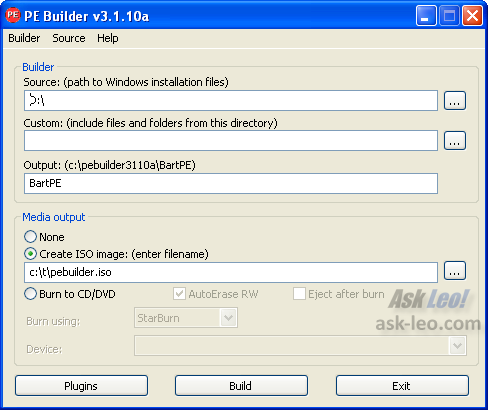 Before we click on Build, though, it’s worth clicking on Plugins:

The PE Builder can include a number of plugins that you might want to select. In addition, some utilities make BartPE plugins available that you can add (using the Add button here). I’ve highlighted the DriveImage XML plugin because it’s not a default plugin, but rather one that I downloaded from the DriveImage XML site and added to the list. You’ll note it’s enabled.

Click Close to return to the main PE Builder screen.

That’s really about all there is to it. Click on Build to create your BartPE bootable CD or CD image.

To use BartPE you simply boot from the CD you created in the steps above. 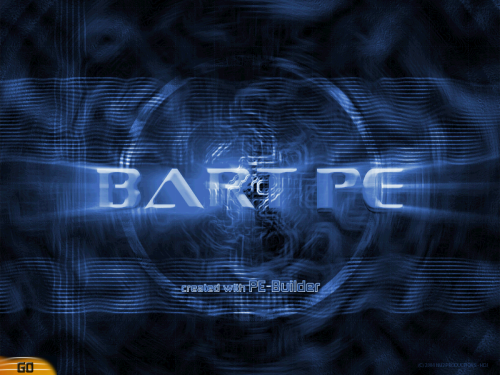 Don’t let the looks fool you – there’s a minimal version of Windows under there.

The “Go” menu is your start menu and therein you’ll find various familiar and not-so-familiar tools: 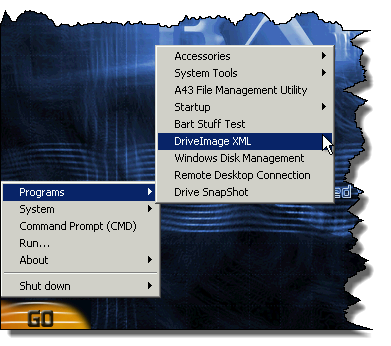 You can see that the optional DriveImage XML component I installed is present and ready to be used.

Bart PE itself is more than can be covered here, but one important item to make the utility of this setup a little more obvious.

Windows Explorer isn’t around, but the “A43 File Management Utility” is: 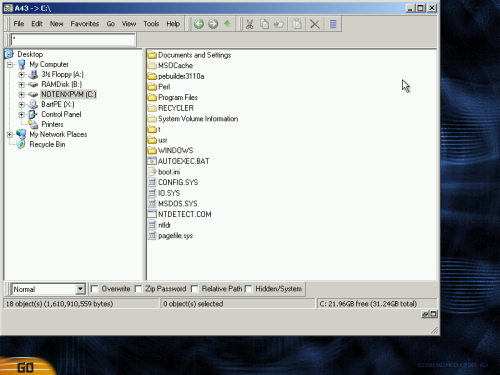 You’ll note that “C:” is there – that’s the hard disk on this machine. The hard disk that I did not boot from. It’s there and visible and ready for whatever you might feel the need to do; recover files, format or whatever.

There are many, many utilities and optional plugins for BartPE – many more than I can cover here. And yes, it’s a tad on the geeky side for the casual user perhaps, but now you can create one, and start exploring and – with caution of course – experimenting a little.

8 comments on “How do I create a bootable Windows XP CD using BartPE?”