How can I change my Windows from FAT32 to NTFS?

First, we need to be clear about something; it’s not Windows that
you are converting, but the way that Windows stores information on your
hard disk.

It’s the disks that use either FAT32 or NTFS as the “file system”
for storing data.

Converting from FAT32 to NTFS is relatively easy. Converting back
… not so much.


In Should I convert my FAT32 drives to NTFS? I enumerated a few reasons why you might prefer NTFS (“NT File System”, or “New Technology File System”) over FAT32 (“File Allocation Table” – 32 bit version) for hard drives:

“Once you’ve made the choice to switch, it turns out to be fairly easy.”

There are also a couple of cases where FAT32 is the better choice:

Once you’ve made the choice to switch, it turns out to be fairly easy.

The easiest, of course, is to make the choice when you’re installing Windows. The setup program allows you to specify that the drive you’re about to install to should be formatted NTFS before the installation begins.

However, assuming you have an already running system and wish to convert “in place”, it’s a simple command.

In a Windows Command Prompt (typically in Start, All Programs, Accessories), type the following:

In this example, I’ve told it to convert my “D:” drive.

Your system will churn away at the disk for a while converting it from FAT32 to NTFS. That’s all there is to it. (Note that if you’ve specified the drive containing Windows itself, you’ll instead be prompted to allow the conversion to happen on the next reboot.)

A word about converting back.

At least not easily.

The convert utility we just ran is a one-way street. It does one thing only, convert FAT to NTFS; it does not support converting an NTFS disk back to FAT32.

The only practical way to covert a drive back to NTFS is to copy all the data off of it, reformat it to FAT 32, and then copy all the data back. (Third party tools like Partition Magic will apparently also perform this conversion, if needed. Be sure to check out both reviews and pricing before going down this path.)

Bonus Question: How do I tell what I have?

If you’re not sure whether your disk is FAT32 or NTFS to begin with, there are several ways to tell, including firing up the disk manager, or right clicking on the drive in Windows Explorer and clicking on Properties: 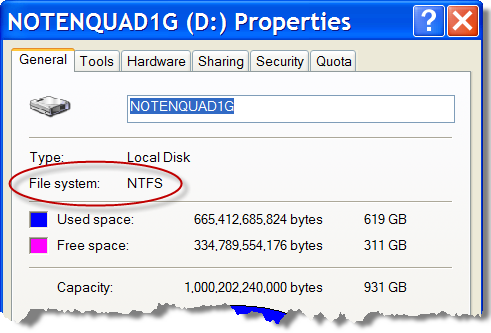 Being a command-line kinda guy, I tend to do something else instead.

I run CHKDSK in a Windows Command Prompt, where the answer appears as the very first line of output:

[D:\] chkdsk
The type of the file system is NTFS.
Volume label is NOTENQUAD1G.
…

For me, it’s quicker, and as a bonus, I let the CHKDSK run to completion anyway, just to check the drive out.