Would it be possible to explain how different memory options interact with
one another?

For example, suppose a computer has 2GB installed RAM and a 1GB Nvidia
graphics card:

I’m thinking I should know the answers, but I’m just not getting my head
wrapped around all of this.

You’re most certainly not alone. The concept of memory in it’s various
flavors, forms, and guises can be very confusing. Add some marketing-speak and
… well, it’s enough to test your memory, that’s for sure.

So, I’ll review the difference between the memory in your system versus the
memory in your video card and why they sometimes overlap.

And then I’ll look at ReadyBoost and discuss why it doesn’t really relate
to either.

Memory is not disk

I know that this is obvious to many, but it’s a confusion that I see
surprisingly often.

When we talk about “memory,” we are not talking about what is stored or
remembered on your computers internal hard disk. The question I see often
relates to having filled up the hard disk storage on a computer and thinking
that you’re “out of memory”, which is not the case at all. 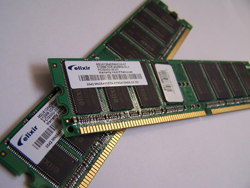 The term “memory” in most cases refers to RAM – Random Access Memory – that’s the memory that holds
programs when they are running and the data that those programs might
be working on. RAM requires power to be applied to retain what it holds, so
when you turn off your machine, RAM is erased instantly.

The process of booting your computer is nothing more than a glorified and
complex sequence of reading programs – like Windows itself – from the hard
disk, loading it into RAM so that it can be run.

Video memory gets confusing very quickly, simply because there are
several possibilities as to how it might be implemented1:

The good news is that in recent computers, higher end graphics cards often
follow the first model, and the move to 64-bit operating systems makes the
second model irrelevant. Falling prices for RAM have made the third approach
pretty much a thing of the past.

So, with those two things out of the way, let’s look at your specific
questions.

Nothing that you would recognize gets stored in the video card.

By that, I mean that nothing you might consider the data belonging to Windows
or the programs running under Windows gets placed into video memory. Instead,
that’s what the system RAM is for: your running programs, the data that they
might be working on, and so on all get placed into your system RAM.

Video memory is concerned almost exclusively with the pixel-by-pixel
representation of what you see on your screen.

Consider a display that is 1920 pixels wide by 1080 pixels high – the
current definition of 1080p HD. That’s a total of 2,073,600 pixels. If you’re
using 24-bit, full-color that’s three bytes per pixel at a minimum required to
represent what’s on the display, or around six megabytes.

That’s the kind of thing that gets stored in video memory.

I can hear you saying: but six megabytes isn’t one gigabyte! Indeed. I did say
that it’s the minimum required to hold a pixel-by-pixel representation
of a 1920×1080 display. In reality, many graphics cards have become little
micro-computers themselves. Graphics circuitry now often includes things like
built-in complex 3D functionality, multiple monitor support, and many featurs
targeted at high-speed rendering of everything from animations to immersive 3D
environments.

Ultimately, graphics cards use their memory to perform those tasks behind the
scenes.

“Does a portion of the 2GB RAM still get set aside (memory mapping?)
because of the 1GB Nvidia?”

Unless you have a particularly old and cheap graphics card, it will in all
likelihood bring along its own memory and that will be used without impacting
your system RAM. The only case where this might not be strictly true is the
case of a 32-bit machine in which you have placed a full four gigabytes of RAM.
Your video card might contribute to your system not being able to
access all four gigabytes as system RAM.

“What happens if a 4GB (or 2GB or 8GB) flash drive is plugged in and
used as Ready Boost?”

At least nothing we’ve talked about so far.

ReadyBoost is completely unrelated to your system RAM and your
video memory.

As a result, adding a flash drive and using ReadyBoost has absolutely no
impact on the concepts discussed above. What goes in system RAM still goes in
system RAM and what happens in video memory stays in video memory.

So what is ReadyBoost good for?

In my opinion, not much.

ReadyBoost, as I understand it, is simply a technology used to make loading
programs into RAM faster. Windows places “some” things onto the ReadyBoost
device so that when they are needed, they are read from it instead of your
presumably slower hard disk.

I know some folks have reported performance improvements using ReadyBoost.
That’s great for them, but I remain very skeptical and typically don’t
consider it worth the effort.

“Which computer would provide the best performance and why?”

Well, my stance on ReadyBoost should be clear by now, so I’ll remove that
option from the table; in my opinion, there’s really no benefit to it and
comparing it in a system configuration without it is very much comparing apples
to oranges.

As for the rest, my standard answer: it depends.

It honestly depends on how you use your computer. It’s very possible that
your usage may not require four gigabytes of RAM.

But, on the other hand, Windows loves RAM and it’s always better to have
too much than too little.

That’s one of the reasons adding RAM is one of my first recommendations for
speeding up a slow system.

So, of the choices presented … more system RAM wins, without question.

My recommendation in general when considering a new machine is two-fold:

The fact of the matter is that systems and software only creep upward in
terms of requirements over time. What worked great in 2GB three years ago might
be struggling today. It’s easier to simply prepare for that eventuality from
the start.

1: As always, I have to point out to the pedants that I’m intentionally
over-simplifying what is almost by definition a very complex topic, meaning
that some of the details may well be glossed over or appear incorrect. My goal
here is to explain only at a high level the types of things going on.

9 comments on “How Do Different Memory Options Interact with One Another?”