Files and folders can be undeletable for a variety of reasons. I'll review several techniques to try when faced with the issue.

In a previous article, I used a folder that I could not delete as an example of a problem not worth fixing. One could waste a lot of time trying to fix something that was ultimately inconsequential.

But what if it does matter?

Folders that can't be deleted

The most common causes of folders that can’t be deleted include being in use by another program, the length of the entire path to a file in the folder, and invalid characters in one or more file names. Closing programs, rebooting, and renaming or moving the offending files are common solutions.

In my experience, there are three common causes of undeletable folders or files.

The file is in use. This is often resolved by closing the program that’s using the file or folder. In case you can’t determine which program that is, a reboot also frequently clears it up. You can also use Process Explorer to determine what program has the file open. See How Can I Find Out Who Is Using a “File in Use”? for more details.

While the file name — example.txt — is only 11 characters long, the full path has a length of 35 characters.

Depending on the Windows API being used by whatever tool you might use, the maximum length of a path is either 260 characters or approximately 32,767 characters. While running into the latter is rare, the former is not uncommon. If a path is created that ends up being longer than 260 characters, it can be undeletable using some tools.

The character “>” is not allowed in a file name. In theory, there should be no way to create a file with an invalid character in its name, but for a variety of reasons, experience once again shows it can happen, typically with non-Microsoft tools or tools that have been ported from other operating systems with different restrictions.1

Solutions: start by deleting what you can

When I’m faced with this situation, there are several things I try if closing programs or rebooting doesn’t help. Almost all of them are time-consuming — hence my previous post on why it’s not always worth the effort to solve every problem.

To begin, I start with an admin Command Prompt. If “C:\foldername” is the folder I’m having problems with, I enter:

“RD /s .” says “Delete the current folder and everything in it.”

This will delete everything that’s deletable. What’s left will only be the files and folders with problems. When you’re experiencing this problem, you’ll likely get several error messages about files that could not be deleted.

For every file that remains in the undeletable folder tree, back in Command Prompt I would change directory to the folder containing the file:

I would then try renaming the file to something simple, like “t.t”.

(If the current file name is more complex than “example.txt”, I’d probably type the first character or two of the file name and then press the TAB key to let Command Prompt auto-complete the name.) If the rename works, I’d then delete the renamed file.

If any of these steps fail, I’d try moving the file to the root of its drive:

Thus if the file were “C:\foldername\subfolder1\subfolder2\…\subfolderX\example.txt”, after the move it would be “C:\example.txt”. If the move was successful, I’d then delete the file.

Once I’d done this for all the problematic files (often there’s only one), I’d then try to delete the original folder once again.

Without going into extensive details, here are a few additional techniques I might consider.

I expect readers to have additional ideas, so do check out the comments as well.

Since this can sometimes be time-consuming to research and repair, make sure it’s worth it first. If it is, you now have a collection of techniques to try to delete the offending file or folder. 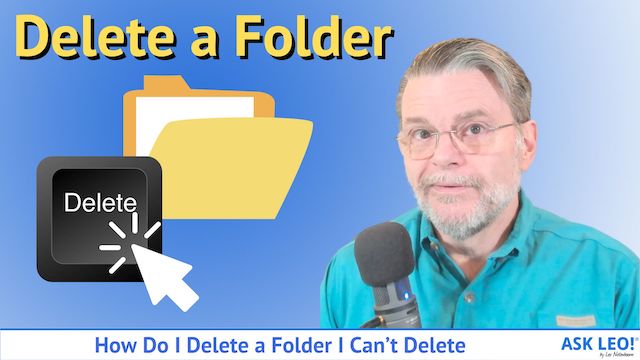 1: Even then, the Windows API should prevent it — but once again, it can happen anyway.