What to look for when swapping the power supply.

Replacing a power supply is a common solution to some problems. Make sure you have the right wattage power supply. Bigger doesn't hurt.
I want to upgrade my current case that has a 300W PSU to a nicer looking case, but it has a 520W PSU. Is it ok, and how does the “W” difference influence PC operation?

It’s quite all right, and if things were working well before, you probably won’t even notice a difference.

Let’s look at why, and just what that “W” means. I get questions on this topic frequently.

More watts: is it safe?

W is for watts, which means power

The “W” stands for watts, which is a measure of electrical power.

Power supplies are rated by the maximum amount of power they can deliver. That means a power supply rated for 520 watts can supply more electrical power than one rated for 300 watts.

That’s more electrical power. It won’t make your computer run faster or give you more “computational” power — this is only about the electricity required to operate your computer.

The power you need

If your computer has been running well on a 300-watt power supply, then it doesn’t need a bigger one.

But there’s nothing wrong with using a bigger one. It’s possible that a new, larger power supply might be a little more efficient or perhaps a little quieter.

Your computer will continue to use whatever amount of power it was using before, which we know is less than 300 watts. That your new power supply might be capable of providing more is beside the point.

A new power supply is typically called for in one of two situations:

In either case, the solution is a replacement power supply.

In the first case, a power supply with the same rating as your old one will do; in the second case, you’ll need one with a higher wattage rating.

If you’re going to replace your power supply, I recommend replacing it with one that has a higher wattage rating. It hurts nothing to do so (other than, perhaps, your wallet, depending on how far you go).

More to the point, it makes your machine more capable of supporting additional hardware power requirements in the future.

What a power supply will not do

I’ve heard concern that a high-wattage power supply can somehow “force” power into the computer, causing overheating and burnout.

It’s better to have too much power than too little.

There are two more important aspects of power supplies, replacement or otherwise.

If you do replace it, get the right size. By this I mean physical size — there are several standard sizes out there, and they are not interchangeable. Similarly, the number and type of connections provided by the power supply must match your computer’s needs.

Make sure the machine is well ventilated. Using more power means generating more heat, and that heat has to go somewhere. That’s what ventilation is for. Even for your existing working system, make sure things are well ventilated.

Make sure the fans in your machine are working properly and that the airflow is unobstructed. Overheating due to blocked airflow may be the most common cause of computer hardware failure — in particular, the power supply itself.

A word about laptops

If you have a laptop, you’re out of luck. Laptops come with the batteries and power supplies they come with. There’s no real way to “upgrade” their power capacity.

What happens if you use a higher-watt power supply?

In general, if you use a higher wattage power supply in a computer that’s otherwise working properly, nothing will happen and the computer will operate normally. It’s possible that the power supply will be quieter or noisier than what it’s replacing, but that rarely has anything to do with its watt rating. It’s also possible that it’ll run cooler or warmer, but again, this is typically a side effect of the power supply design rather than its capacity.

In an absolute sense, higher wattage does imply more power. A lightbulb drawing 100 watts uses more power than one drawing only 50. The confusion is that power supplies are rated in watts for the maximum amount of power they can deliver. This doesn’t mean they use this amount of power; only that they are capable of delivering that much power if the device they are powering requires it. 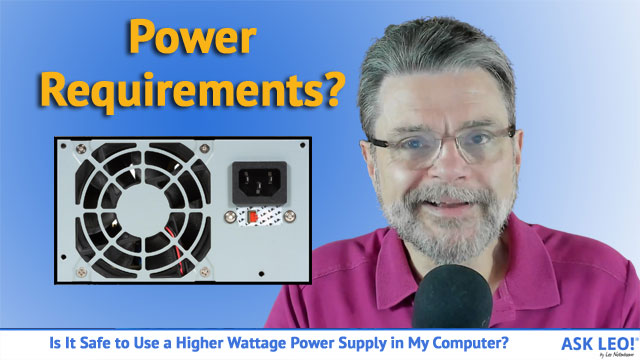 31 comments on “Is It Safe to Use a Higher Wattage Power Supply in My Computer?”