It’s confusing, because you could, but you can’t.

Several urban legends would have you believe that when you forward an email, it can somehow be tracked. It cannot. Period. I'll explain why that is.

How do I get a notification when someone I send an email to forwards that email?

It is not possible to tell if someone forwards your email.

Let me explain a little why the concept just doesn’t work.

For the most part, email you send falls into a conceptual black hole, and you can’t reliably determine if it’s been opened, read, or forwarded. The only way to know for sure is when someone replies or you see some other sign of activity implying someone acted on it.

The problem is that it rarely works. Most people just hit Ignore. In fact, most people have their email programs configured to completely ignore and never even display such requests.

Ask all you want, but you will not get notified.

Even though there’s a “notify on read” option (that rarely works), and a “notify on delivery”1 (ditto, for all the same reasons), there is no corresponding “notify on forward” request or option.

And even if there was, you can guess that most people would ignore those too.

And no, there’s no super-secret, hidden, behind-the-scenes email-tracking technology that can somehow reliably tell when you’ve opened, read, or forwarded an email. That would require the cooperation of every email program on the planet, and that’s just not going to happen.

There’s another technology that confuses this issue, and that’s called open tracking.

It is possible to tell if an email has been opened if and only if:

The act of fetching an image from a remote server to be displayed in an email message can be used to tell that the message was opened.

Spammers often use this technique to determine if a real person opens the email they sent. That’s why email programs default to not showing you images unless or until you tell the program otherwise.

And this still does not allow them to track if a message is forwarded.

Forward tracking could be possible

The thing that really confuses the issue, of course, is that forward tracking is conceptually possible.

On the open internet email system we all use today, it has not been implemented and never will be.

Closed systems are another matter.

I use the term “closed system” to mean environments where all email users — both senders and recipients — are using the same email software, systems, and servers: within a corporation, for example.

It’s conceivable that such a system might track the flow of an individual message, but only within the system. As soon as the message leaves the system (say to a recipient elsewhere on the internet), then such tracking will once again fail.

And for the record, I’m not aware of any closed systems that do this kind of tracking, but it is at least conceptually possible.

Accept that for the most part, email you send falls into a conceptual black hole, and you can’t reliably determine if it’s been opened, read, or forwarded. Only when someone replies or you see some other sign of activity related to the message can you be sure.

Speaking of email, be sure to subscribe to Confident Computing, my weekly newsletter. Less frustration and more confidence, solutions, answers, and tips in your inbox every week. 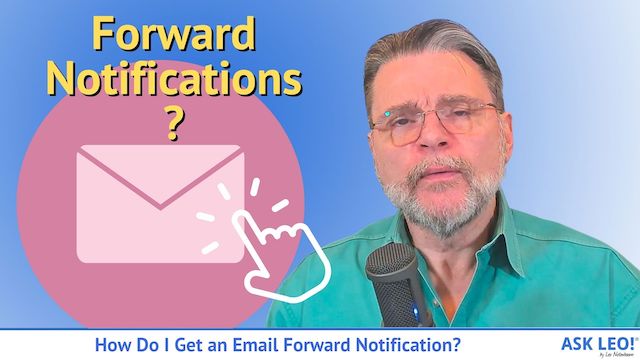 2 comments on “How Do I Get an Email Forward Notification When Someone Forwards My Message?”