In other words, is my computer burning more calories when it’s thinking harder?

While strictly speaking, drive capacity doesn’t have an impact, the internal characteristics of a drive certainly can. And you’re right, it’s all about the moving parts.

But there’s more to it than just the drive.

And while I suspect you didn’t mean it that way, calories is actually also an accurate term.

“A busy disk is a hotter disk, there’s no doubt about it.”

It’s the arms that generate the heat.

Arms? Yes, arms. The arms that hold the magnetic read/write heads that move back and forth from the inside to the outside of the magnetic area of the disk. 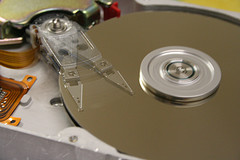 When your computer is idle and doing nothing – i.e. it’s not accessing the disk at all – the arm remains stationary at wherever it last was.

On the other hand, should your computer begin some sort of disk-intensive application, perhaps defragmenting the hard disk, then the arm is moving back and forth across the hard disk faster than the eye can see.

Now, even though the arm is typically very small and very light, it still takes a lot of energy to move it that incredibly quickly, and just as quickly bring it to a stop at or near the desired track of information on the magnetic media. That, in turn, means it uses more power and generates more heat.

A busy disk is a hotter disk, there’s no doubt about it.

To address your question regarding capacity: it’s not typically a factor, directly. Indirectly, if the additional capacity means you’re doing more, or the layout of the data on the platters within the disk is such that the arm has to move more, then yes, one drive could generate more heat than another due to a size difference. My belief is that difference is small compared to other drive-to-drive manufacturing differences.

And yes, defragging your disk somewhat regularly reduces the amount of arm movement required to access files, thus making your computer not only somewhat faster, but also slightly less hot.

The CPU and Power

The other major source of heat in your computer these days is the Central Processing Unit or CPU itself. That’s the part that gets names like “Pentium”, “Core 2 Duo”, “Xeon”, “Core i5” and the like, and the part that we often refer to as the “brain” of your computer.

It’s the part that does the computing.

If you’ve ever looked at Task Manager or Process Explorer, you’ll find that your processor is mostly doing nothing. By that I mean the processor usage measure is often below 10% or even lower. As I type this document, my processor is having a hard time getting over 8% usage, and that’s mostly to update the display of CPU usage. That means that 92% of the time it’s doing nothing. It’s “idling” – hence the “system idle process” you often see listed.

Knowing that the processor in the average computer spends so much of its
time doing nothing, this idle do-nothing state is actually optimized to use  s little power as possible.

Conversely, when the processor is working hard, it uses more power. The harder it works – 10% usage, 50% usage, 90% usage to a processor fully pegged at 100% CPU usage – the more power it uses.

And the more power it uses the more heat it generates. That’s why so often what you think is the processor in your computer is really the cooling fans, fan, piping and heat sink hiding the much smaller processor underneath. It’s important that that heat go somewhere, hence all the additional hardware to bleed it off somehow. (And for the record, today’s more powerful, faster, denser CPUs generate more heat that their predecessors for a variety of reasons including the fact that they’re more powerful, faster and denser.

So, like the disk, a busy CPU is a hotter CPU.

Of Calories and Diets

While we typically think of calories in terms of the food we eat and the weight we’re not losing, the use in this context is actually quite accurate.

A calorie is a measure of energy. Heat is energy. Hence somehow,  somewhere, someone could actually attach a number of calories measurement to the amount of heat generated by your CPU and hard disk.

Calorie is more commonly used as a measure of … well, it turns out to be the same thing: energy, but as contained in food.

The more common unit of measurement for things like heat radiating from computer components would be the joule.

7 comments on “Does my computer use more power or generate more heat depending on what it&apos;s doing?”