Unfortunately, too many people still have their password strength firmly planted at zero.

Splashdata recently released its report of the 100 most common passwords. Analyzing over five million hacked and leaked databases of passwords, they tallied up the most popularly used passwords, and the result is … depressing.

The top five include:

The rest of the list is more diverse but just as obvious, including passwords like “iloveyou”, “qwerty”, “charlie”, “donald”, and many more horrific choices.

Not only are they simple, easy to guess, and clearly on the list of the very first passwords hackers try, but they also suffer from the greatest sin of all, in my opinion.

Next to strength, the next most important characteristic of a password is that it be unique. I explain why in Why Is It So Important to Use a Different Password on Every Site?

When it comes to passwords, length trumps everything. For example, let’s take that #1 offender above:

All I did was add six asterisks before and after, separated by a space. And yes, as simple as that pattern appears to be, it’s a strong password. Much stronger than 123456, and just as easy to remember. (Caveat: it’s a weaker password in that it’s been published here as an example. Don’t use this exact password; use it as an example of a simple technique to lengthen otherwise poor passwords.)

I’ll admit that throwing asterisks before and after a password doesn’t feel secure, even though it is. It just doesn’t feel like we did enough work.

But, to build on perhaps the most quoted XKCD comic of all time — Correct Horse Battery Staple1 — combining unrelated words can be both strong and memorable.

I recently set up an account for a friend and did exactly that. When it came time to generate a password, I looked around my desk, picked three random items I saw, combined them with a fourth item this friend and I had in common, and — poof — a password that was long, strong, and easy to remember.

To repeat my exercise, here’s another:

That’s a 26-character password. If you need special characters, add spaces, or an exclamation point in what for you might be a “standard” location, like at the end or after the first word.

As easy as that password is to create, and as memorable as it may be, if you have a lot of different passwords (and who doesn’t), it can still be difficult to keep ’em all straight. Enter the password manager, which remembers them for you. That way, you need remember only one password — presumably also of the long and memorable variety — and the password manager does the rest.

Because I use a password manager (LastPass), I don’t bother combining words for the majority of my passwords. I go all-in and let the secure password generator do the trick. For example, most of my passwords look like this:

That’s 20 characters of completely random alpha-numeric data. If I need a special character, I’ll throw one in somewhere, making it a 21-character password.

I couldn’t tell you most of my passwords. Not from memory, anyway.

I talk about passwords and password strength a lot because, like it or not, passwords are here to stay. They’ll continue to be an important part of your online and account security for the foreseeable future. Even adding two-factor authentication — as you should, if it’s offered — you’re still relying on the strength of your password as your first line of defense.

Review your passwords and replace short ones with something longer and more secure.

And if you’re using anything on this list, don’t delay a moment longer. Go change that password now. 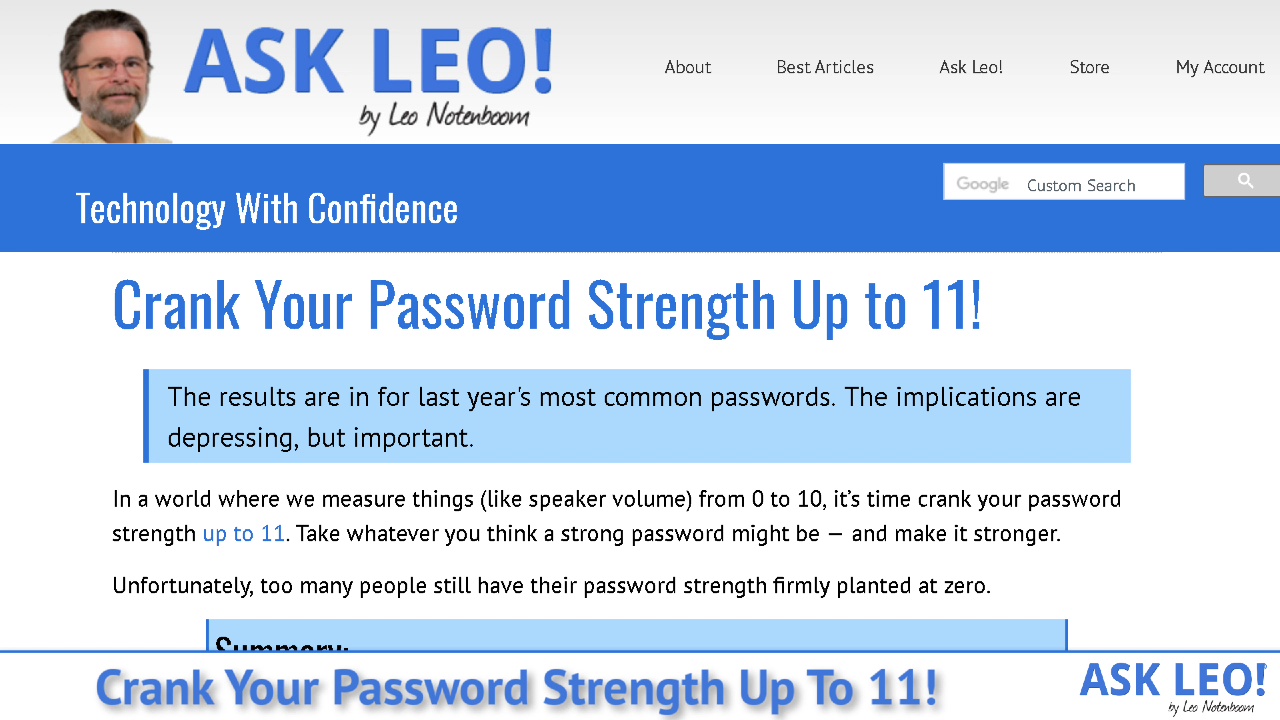 1: Which I did not have to look up — it’s that memorable.