We’ve all wanted to.

There are a couple of exceptions (one of which isn’t really an exception at all), but the answer you need to keep in mind and always remember is simply no.

Once an email has been sent, it cannot be “unsent”.

I’ll describe why, and what those so-called “exceptions” are all about.

You cannot recall or “un-send” an email. Once it leaves your outbox, you lose all control over it. Gmail’s “undo send” only delays the send for a few seconds so you can change your mind. While some corporate systems may have the ability, email sent between systems and across the internet simply cannot be un-sent. You must assume Send is final.

When you hit Send…

When you hit the Send button, the following happens:

There are two things that are important to realize about that scenario:

Not really an exception: Gmail

Many people point to a feature in Gmail and tell me, “But Gmail lets you undo send!”

When enabled, all this option does is delay sending your message for up to a maximum of 30 seconds. During that time, you can cancel or “undo” the send.

Once those seconds have passed, the message is really sent.

And once it’s really been sent, it cannot be un-sent.

All this feature does is give you a few seconds to change your mind. After that, you’re still out of luck.

An actual exception: some corporate systems

“Corporate” here is really just a characterization, because of course these email systems may be used elsewhere. It’s just most common to see them in large corporations.

Some of these email systems have a real, honest-to-goodness un-send option.

However, there are two requirements:

In that case, it’s possible that an un-send function will actually remove your message from the inbox of the recipient(s).

Hopefully this is obvious, but once they’ve read the message, there’s no way to make them un-read it. Once seen, it cannot be unseen. You might be able to remove the evidence — the message may disappear from their inbox — but even then, they could have copied or printed it before that.

The intent was to provide a semi-standard way to recall, or bring back, a sent message: a way to un-send it.

The problem is, it’s not implemented (or it simply doesn’t work as intended) in most email programs. When I’ve seen this attempted, the cure seems much worse than the disease.

When recall is used, it sends another email message to all the recipients of the original message which says:

I’m sure the idea is that the recipients will never see the message, and the mail programs would just recognize some special headers and perform the recall function by deleting the original message from the recipient’s inbox.

In practice, that’s not what happens. What happens instead is everyone who got your first message by mistake now gets this second message, drawing even more attention to your mistake.

I’m sure it works on some system somewhere, but make darned sure you understand whether or not it will. Otherwise, it’ll just make people pay more attention to your original mistake. Much like a politician attempting to delete evidence from the internet, there’s a very good chance that all it will do is make people take more notice of whatever you’re attempting to hide, and perhaps make copies even further out of your reach.

The moral of our story

There is no “undo send”.

Even if you could undo a sent email, you still run the risk of people reading the email before you hit Undo.

Bottom line: make sure you really mean it when you hit Send. 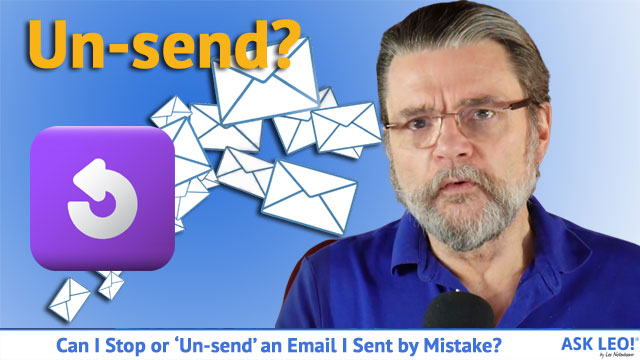 2: Even though the entire infrastructure of email is designed to tolerate delays measured in days, and we occasionally see that, more often than not email is delivered in a matter of seconds.