My wife has recently been intermittently experiencing the blue screen of
death while on MySpace. It also wipes out the bookmarks in Firefox. I have
always kept her machine lean and mean and up to date. It has current drivers,
only four background programs and five non-Microsoft tasks running. Two
separate Dell diagnostic programs give the hardware (one year old) a good bill
of health. I have recently read that MySpace is using MS server software that
is running out of expansion capabilities, and they are in fact having
difficulties. Can a web site with the right combination of problems result in a
BSOD or can that only occur locally within the PC due to a local problem?

Whatever problems MySpace may or may not be having, causing your “blue
screen of death” (BSOD) isn’t one of them.

A BSOD should never happen, but when it happens it always indicates a
problem happening on your machine.

The dreaded “blue screen of death”, or BSOD, appears when Windows determines
that a very serious error has happened, and it can either no longer continue
running safely, or it’s become so “confused” about what it should be doing that
it can’t continue. 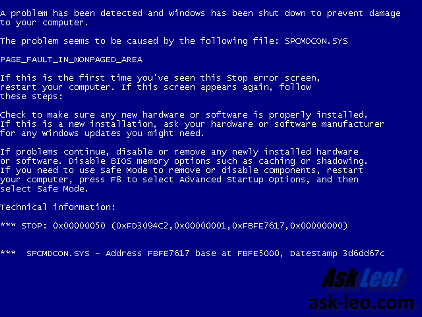 Typically whatever you were doing at the time the error happens is lost, and
your only recourse is to reboot your machine.

A BSOD “should” never happen. Windows is actually architected to handle
errors in much more graceful and less abrupt ways. If a program does something
wrong, for example, only that program should be affected; Windows, and your
machine, should keep running without a problem.

But there are two common places where Windows simply cannot protect itself
enough, and thus must rely on the last-resort BSOD to report errors:

“A BSOD ‘should’ never happen. Windows is actually
architected to handle errors in much more graceful and less abrupt ways.”

There are other issues that can cause a BSOD, including bugs in Windows
itself, but those BSOD bugs are very infrequent these days.

Note that there’s nothing in the previous discussion about websites or the
internet. A BSOD is something that happens on your machine, because of a
problem with your machine or the software on it. If you regularly experience a
BSOD when you visit a particular web site, then that web site isn’t directly
causing a problem, it’s simply causing your computer to exercise some software
or hardware on the machine that has the problem.

So what do you do?

Well, to start with it sounds like you’ve been doing the right things:

The BSOD looks like a bunch of gobbledygook to most folks, but there’s often
an important clue or two in the mess. For example:

In this example, the BSOD is actually pointing at a specific file that
may be related to the error. If it’s the same file every time, then
that suggests a software or driver issue. Figuring out what that file does
(often a quick Google search will do), may lead you to the driver in question.
If not the software, then it may indicate a problem with the hardware that
driver controls.

Unfortunately it’s only a clue, not an answer. The file may be totally
unrelated to the problem.

Often diagnostics that come with computers aren’t quite as thorough as we
might like. There are two tools in particular that I would suggest, depending
on your situation:

BSODs can be very difficult to track down. In many ways it boils down to
detective work, and I hope that with some of the information above you’ll be
able to get a few clues as to what’s going on with your machine.

18 comments on “Can a website cause my computer to get a "blue screen of death"?”