Can I copy Windows 10 system files to another drive and boot from it, assuming all other computer components are original to the first drive? I want to keep my Windows 10 license.

Taking your question literally, the answer is no. You cannot simply copy Windows (or pretty much any installed operating system) from one drive to another, or one machine to another, and have it work. Windows is too complex.

However, if what you’re really trying to do is, say, replace a hard disk, or move your Windows installation to a different machine, the answers get more complex — and in some cases, more promising.

While that approach will copy a lot of files, it won’t copy everything. It’ll miss things like:

It’s a lot more than just copying a few files.

Conceptually, replacing a hard drive is pretty simple, but the devil is in those details. More here: How Do I Transfer My System to a Replacement Drive?

There is one scenario where a form of copying will work. It’s an important scenario for disaster recovery: hard disk replacement.

The biggest caveat to this scenario is that the only thing that’s changed is the hard drive, nothing else. We’ve not “moved” the operating system to another drive — say from C: to D: — we’ve simply replaced the hard drive that is C: and put the data back on it.

All else requires installation

As I mentioned above, Windows is a very complex operating system, and installing it is an intricate process that involves more than just copying a few files. Things like hardware selection, registry values, and configuration options are all determined and written during the installation based on the characteristics of the machine at that time.

Even if you were able to “move” the operating system to a different drive with a simple copy — say a second drive that you expected to dual-boot from — that move will invalidate many of the options that were originally determined at setup time. Sometimes Windows will recover some of the information as it notices something’s changed, but often it will not.

The “right” solution to moving Windows from one drive to another, or from one machine to another, is to reinstall it from scratch. That’s the safest approach with the most stable result.

When Windows 10 is installed, it’s issued a digital license for the machine on which it was installed. In theory, then, that copy of Windows cannot legally be moved to another machine. Chances are if you move a hard drive, copy an image, or even use some of the utilities that offer to move Windows from one machine to another, the result will be an un-activated Windows installation. You’ll likely need to provide1 a new key to license that copy of Windows to the new machine.

Even on the same machine, things can get dicey. Hardware — like the hard drive — can be replaced or upgraded. But like the Ship of Theseus, how much hardware can you replace and still have Microsoft’s licensing monitor consider it the same machine? Eventually something will fail the test, and Microsoft will consider the machine changed “enough” that Windows will consider the machine to need a new license.2

To bring this all back to the original question, even if you were able to copy Windows 10 to a second drive in the same machine without replacing the original drive, and even if you were then able to boot from it, I expect Windows would consider it a different machine, and require a new license. Ultimately, you’d have two copies of Windows 10 on two different drives at the same time, which would imply a need for two licenses. 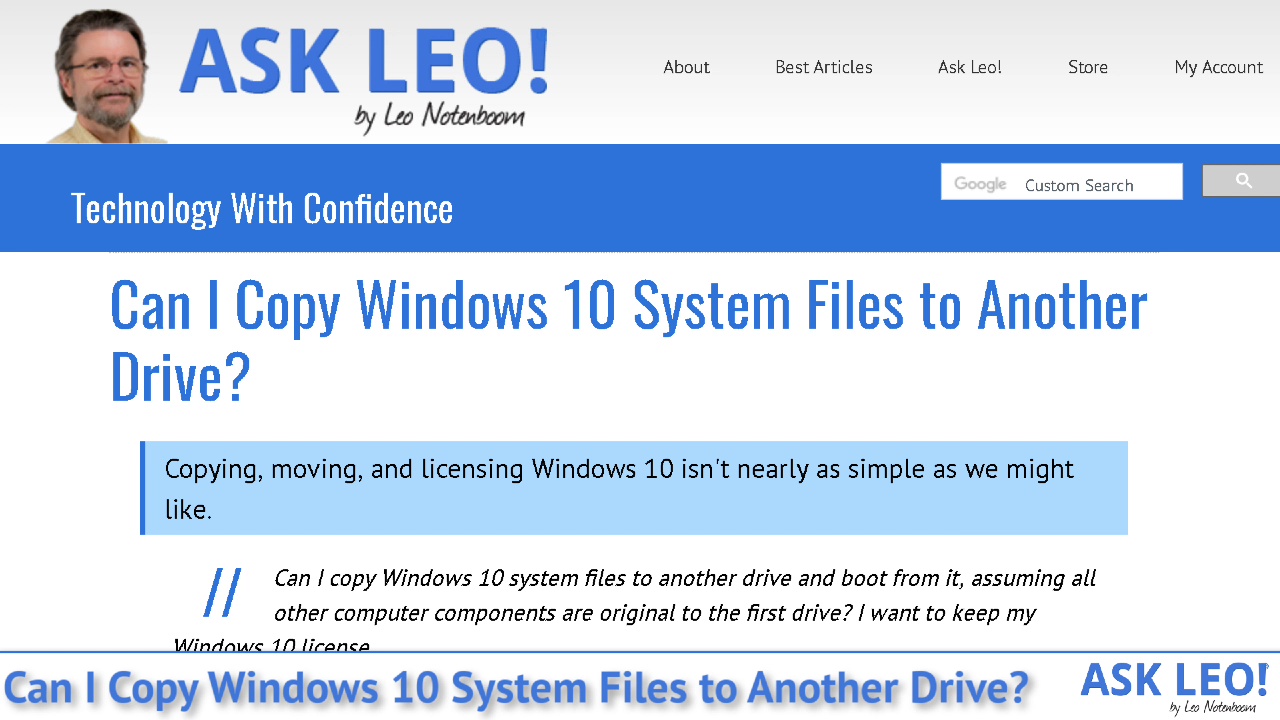 2: Typically, activation will fail, and you’ll be presented a phone number to call. Depending on the scenario, you can often make a case that it’s the same machine, and the digital license will be upgraded to your new configuration.

15 comments on “Can I Copy Windows 10 System Files to Another Drive?”