My son installed Torrent on the house computer. This of course, without
asking first as is the rule. This program slowed my computer down
so much that I could not get online. I found out that as it was downloading, it
was also uploading with unlimited bandwidth. I could not find any
information on what it was uploading. I dislike P2P because of past
experience with them, virus, spyware and the feeling I am stealing
from the programmer, this program was promptly uninstalled. Is there
any legitimate use for P2P programs?

This is a very sad case of some very amazing technology getting
smeared with a bad reputation because of how some people choose to use
it.

Absolutely, there are many legitimate uses for peer-to-peer (P2P)
file sharing programs like BitTorrent.

In fact, I wish it were used more.


In a traditional download there is one “master” server on which a file is placed, and then everyone wanting that file downloads it from that server: 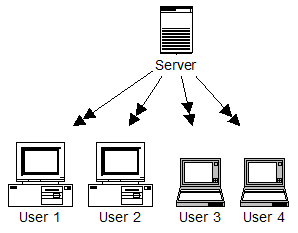 Now, as you might expect, if a lot of people want that file, then the server can quickly become overloaded.

One solution is to “mirror” the file on several servers, and then somehow distribute the download requests across those servers: 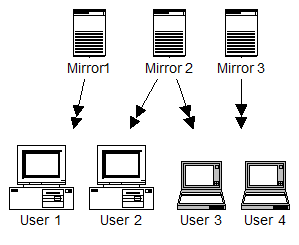 This is still a “master copy” model; only a handful of servers hold the master copy of a file, and you must go to one of those servers to get it.

P2P does away with this distinction. The fundamental concept is this: given that many machines have downloaded a file, they each then make the file available to others directly from their machine. There is no “master” distinction, all the computers are equal “peers”, and any that have a copy of the file can offer that to any other computers looking for a copy of that file: 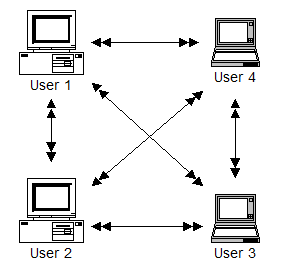 The advantages over normal file downloads are many. If a master file server goes down, you can’t get the file. If one of the peers in a P2P network drops off, you keep on getting the file from another peer. The bandwidth usage, rather than being focussed on a single master server is distributed across all peers, often resulting in faster downloads.

“… peer-to-peer file sharing is just a technology designed to optimize how bits (files) get distributed on the internet.”

In addition, the P2P protocols add some additional optimizations. For example, rather than downloading the file from start to finish on one connection, as you would in a traditional server based download, a peer may open connections to several other peers, each downloading separate parts of the file all at once. This typically makes much better use of bandwidth than a straight download. The moment any part of the file has been downloaded, that part can be immediately shared with other peers who don’t have it yet. Yes, this means that a machine could be sharing and uploading parts of a file that it hasn’t even completed downloading yet.

But hopefully by now you can see that peer-to-peer file sharing is just a technology designed to optimize how bits (files) get distributed on the internet. Nothing more, nothing less.

The fact that much of what is being shared might be in violation of someone’s copyright doesn’t alter the fact that the technology being used is valid and valuable.

For example, that same peer-to-peer software can be used to fetch the latest copies of many open source projects, such as Ubuntu Linux, other Linux distributions, and applications like OpenOffice. Since P2P works well for truly large downloads of things like entire CD or DVD images you’ll often find it as an option for these types of files.

By the way, my expectation is that the program slowed your internet connection down, not your entire computer. BitTorrent is designed to make the maximum, most efficient use of the internet connection that it can, often leaving it difficult for other computers or applications trying to share that internet connection. The good news is that almost all P2P file sharing programs have “bandwidth throttles” built in. This means that you can instruct them to limit their upload and/or download speeds to something less than your full connection speed, leaving bandwidth over for anything else you might like to do while files are being transferred.

14 comments on “Are there any legitimate uses for peer-to-peer file sharing programs?”