Generally, yes, but sometimes the cost is much higher than you bargained for

It's important to develop a sense of what to expect so you recognize legitimate update messages.
Is there a fee for all the ‘Updates are ready for your computer’ pop ups?

Legitimate update notices are generally free to install. Some are notifications of a new version, which may require payment. So-called “scareware” tries to scare you into action, and you should never pay. By far the most important to be clear on is Windows itself: learn to recognize its update messages; it’s free.

Windows (and many of the applications installed on your machine) displays a pop-up to notify you when updates are ready.

From the wording you’ve used, I assume you’re seeing a pop-up from Windows itself. “Updates are ready for your computer” is typical Windows Update wording.

Updates to Windows are free. Period. Doesn’t matter if it’s a minor security update or a more major “feature update”; for any installed and activated copy of Windows, these updates are free.

They’re also important. I recommend you take them.

Some legitimate pop-ups: maybe not

Other applications often use similar techniques to notify you of available updates. They may indicate that the updates are available to download, or have already been downloaded and are ready to install.

Most application updates are free. Like Windows updates, they’re generally important, and I recommend you take them.

Some application updates are not free. This varies dramatically based on the application itself, but options include:

Again, most applications make it clear which scenario you’re facing. You may need to click on the update notice to get the information that will tell you.

There’s a particularly annoying form of malware referred to as “scareware”. As its name implies, it tries to scare you into taking action — action that is typically completely unnecessary.

Action that, at best, often costs you money. At worst, it loads your machine with more malware.

It’s a bit of a chicken-and-egg problem, but the most important thing is to learn to recognize the Windows Update message. If you’re unsure, you can search for an image — using its exact wording — online.

The same is true for applications. Though you probably won’t see the messages often, if you do you’ll begin to recognize them when they appear.1

On the other hand, if you get a pop-up message that seems overly insistent or downright threatening — particularly if it’s asking you to call a phone number — that’s a sign that you’re not dealing with a legitimate update. DO NOT follow the pop-up’s instructions.

And if the popup, or the information that results, starts talking about requiring payment, stop. It might be legitimate, as I mentioned above, but it may also be a scam. Take the time to research its claims prior to proceeding.

It’s worth being careful when you’re presented with popups or webpages that encourage you to take updates. Many are both legitimate and important.

Others, however, are anything but, and may involve paying the ultimate price: that of a technician to help clean up whatever it is they’ve done to your computer. 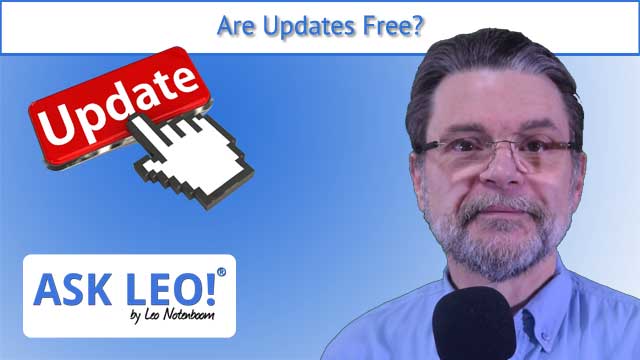 1: Note that some applications will tell you “there’s a new version” as a way to get you to update to a paid product from a free edition or free trial. Those, of course, are not free updates.

2 comments on “Are Updates Free?”