I’ve been fighting a problem with my email it seems for weeks now. [Further
details removed.]

My username is [removed] and my password is ‘tires4you’. Can you help?

I’ve removed the details of what is basically a composite question, because
this isn’t about the question.

It’s about what’s horribly, horribly wrong with the question.

And it’s something that I see so often that it’s time that I said something.

And no, it’s not that the password is horrifically unsecure (although it is).


You gave your account information to a total stranger

You don’t know me.

You don’t know the people that work for me.

I absolutely believe that I have the highest level of integrity and that I would only have people working for me who are just as honest.

The point is that you don’t know that.

For all that you know, I or someone on my staff could be a spammer, a scammer, or worse. We’re not, but how do you know?

And yet, you handed over your account information to total strangers you don’t know. 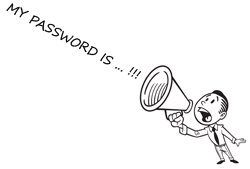 On the same day that I elected to write this, not only did I get questions that included account credentials, someone else posted their credentials in a comment on one of the other articles here on Ask Leo!

Comments that are visible publicly.

Anyone can see ’em. Anyone!

People looking for help are often in desperate situations. Losing access to an email account, particularly if it’s not been managed well, can have devastating impact.

Don’t let your guard down out of desperation.

Definitely don’t just offer up your password to random websites or place it in comments in the hopes that someone will help you. You’re more likely to make matters worse – much much worse – by doing so.

To be brutally honest, it doesn’t surprise me that the people who give me their passwords unasked are having problems with their accounts. Most often, they’ve lost access to it and I can see why.

That kind of thinking must change.

And don’t just hand it over to strangers.

Or anyone else, for that matter.

PS: By the way, ‘tires4you’ is a horrificly unsecure password. A hacker can probably guess that in minutes and a computerized attack would crack it in less than a second.

† OK, ok … there are very rare circumstances when it makes sense to give your password to someone. Let me emphasize rare circumstances. Only then to someone you already know and trust completely, and for a specific purpose and limited time, after which you change your password. When in doubt, don’t; just don’t. The number of accounts I see lost forever simply because people trusted the wrong person would astound you.