Will using BitTorrent harm my computer, and if so and under what conditions
will it?

BitTorrent itself is highly unlikely to harm your computer.

However what you download using BitTorrent – well, that’s a
different story. Some caution is called for.

And I know some of you are asking … “what’s a BitTorrent?” 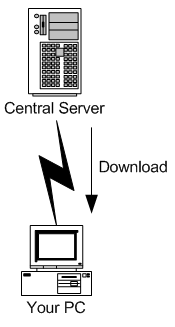 The “problems” with that approach include the fact that there’s a central
server – if it goes down, for example, you can’t download the file. Another
problem is that everyone is picking up the file from one place – that means
that for a popular download, that server better have a very fast or “high
bandwidth” connection to the internet that all people downloading at the same
time can share: 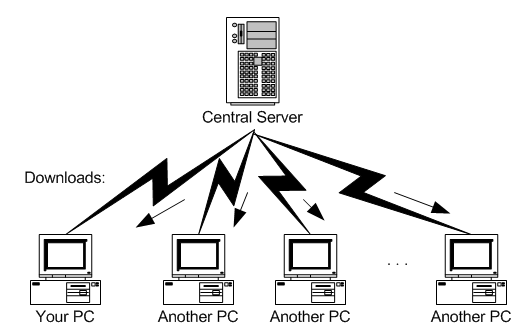 BitTorrent is one implementation of something called “peer to peer” file
sharing. Rather than downloading from a single central server, the download is
divided into pieces, and those pieces are downloaded from different
computers: 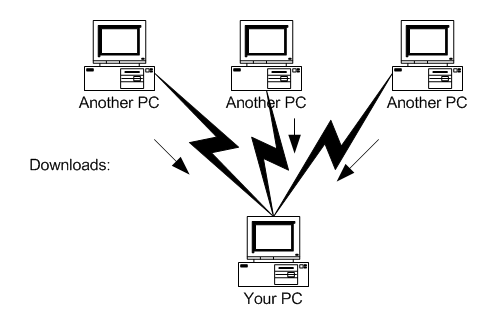 Note that we no longer think of those computers serving up the files as
“servers”. Rather, they’re your peers – other computers pretty much just like
yours. Hence the term “peer-to-peer”.

“The problem is not with the technology, but with how
it’s frequently used.”

By copying peer-to-peer the bandwidth used is spread out across many
different paths through the internet. Peer #1 might be down the street, peer #2
might be across the country, and peer #3 might be across the planet. Each will
serve up parts of the file as fast as they can, and your BitTorrent client
patches those pieces together as they arrive.

Now, how did those peers all get the file in the first place? The same way
you’re downloading it. And how did they start serving up pieces of the file? By
running the BitTorrent client. One important aspect of peer-to-peer file
sharing is that as soon as you’ve downloaded even a piece of a file, your file
sharing client can then make that piece available for someone else to download
from you. Your computer becomes one of the peers that can serve the file to
others.

A more accurate diagram of peer-to-peer file sharing is this: 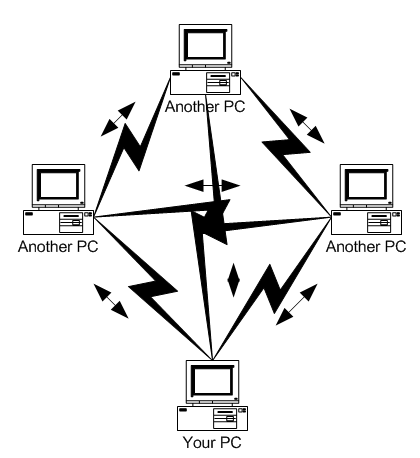 In this diagram every computer interested in sharing or downloading a
particular file is, effectively, connected to every other interested in that
same file, sometimes called a “swarm”. If a computer doesn’t have all the parts
of the file, it keeps asking other peers for the missing pieces until it has
the complete copy. It can then remain in the swarm, making all the pieces
available to any other peers that ask.

So that, in a nutshell, is BitTorrent, and peer-to-peer file sharing. In and
of itself, it’s just a different technology to download files, and there’s
absolutely nothing inherently wrong with that. BitTorrent itself will not harm
your computer in any way.

But there is a problem.

The problem is not with the technology, but with how it’s frequently
used.

As you can see from that last diagram, there is no single authoritative site
for a particular file being shared on a peer-to-peer network. If you take out
any one of the computers in the network, the rest can continue to share and
copy the files quite happily.

That means it’s extremely difficult to stop a file from being
shared.

It also means that it’s very difficult to track down all the sites sharing a
file.

In turn, that means that sharing illegal or pirated copies of files is much,
much easier, because it’s much less likely that any single sharer will be
tracked down and prosecuted. Possible? Yes. But definitely more difficult.

So, many peer-to-peer networks have a lot of illegal content.

Even so, downloading illegal copies of legitimate software, music or videos
won’t harm your computer. It’s wrong, but it won’t harm you.

Spyware and viruses, on the other hand, will.

What many hackers and malware creators have realized is that there are a lot
of people downloading illegal software from peer-to-peer networks. Since
there’s almost no accountability for what gets placed on a peer-to-peer
network, it’s trivial for them to put up lucrative files that have been
infested with malware. For example a file sharing network might offer
“Microsoft Office”, and it might even be a copy of the latest and greatest copy
of Office. But it’s quite possible, perhaps even likely, that the person that
first shared that copy added to it spyware or viruses in the hopes that people
would be tempted by a free copy of an expensive product only to install much
more than they bargained for.

And that’s what will harm your computer – the malware that often
accompanies “free” software available on peer-to-peer networks.

Because, let’s face it, who would you complain to if you find that your
latest free download infected your machine with spyware? As I said, there’s no
accountability, and nowhere to turn.

Besides the moral and ethical reasons for not downloading illegal software,
the risk of infection is a very practical reason to stay legit.

22 comments on “Will BitTorrent harm my computer?”