Somehow my computer seems to be picking up radio sounds. It makes it
difficult to hear a message that I want to hear because it is on all
the while I am on my computer. It’s on even if I delete everything
right down to the desk top. Can you tell me what is happening and how I
can resolve this problem?

There are many, many possibilities which may have caused
what you’ve described. It’s unclear if what you’re hearing is true radio,
some kind of interference, or perhaps something cross-connected in
your computer or audio system wiring.

Let’s look at the most common causes and solutions. 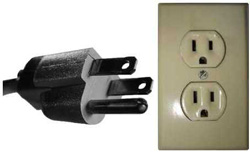 My very first reaction is to think that perhaps your computer is not properly grounded.

While the two primary connections provide power, that third pin, ground, is often overlooked and not connected – often in older homes built before the additional grounding wire was required.

One of the side-effects of not being properly grounded is that electronic devices, such as your computer or various components used with it, can act as radio antennas, and in some cases the result is that you might actually hear a broadcast radio station, though more commonly the effect is simply noise or static. Typically, these sounds are relatively low in volume, but can occasionally become strong enough to be heard and interfere with what you’re actually listening to.

The solution is simple in concept: make sure you’re grounded. Make sure that all power connections in your control include the grounding connection.

The second thing that came to mind was some kind of additional input into your computer that is somehow being mixed in to your audio output. My first reaction would be mute everything except what you want to hear. Right click on the speaker icon in your taskbar:

(You may need to enable the speaker icon in Control Panel, Sounds and Audio Devices.) Click on “Open Volume Control“. (In Vista, it’ll be labeled Open Volume Mixer, and things will appear a little different, but the concepts are similar.)

Make sure that everything except “Master Volume” and “Wave” have Mute checked. “Wave” is your computer’s ability to play MP3 and other audio files. (The exact number and contents of columns here will vary depending on your specific audio hardware, but in this example “SW Synth” is the MIDI synthesizer, “CD Audio” is exactly that, audio played directly from an audio CD, “Line In” is whatever is plugged into your computer’s Line-In jack, and “PC Speaker” is a synthesized replacement for your computer speaker’s beep).

If the radio you’re hearing goes away as soon as you click on one of these “mute” items, then you’ll know where the problem lies.

And then you can troubleshoot that path, or turn on the other devices that you might need or want.

Conversely, if the problem remains, but goes away if you mute “Master Volume”, you’ve clearly identified that the problem is somehow likely related to the audio your computer is attempting to play. Make sure you don’t have some audio player actually playing music in the background – perhaps even a web page that has audio could be enough to end up being very confusing in situations like this.

The last thing that comes to mind is whatever speakers or audio system you have connected to your computer.

Fortunately, diagnosis here is extremely simple: disconnect it at the computer and try something else.

For example, if you have speakers connected to your computer, unplug them, and connect a pair of headphones in their place, or another pair of speakers. Once again, if the problem goes away when you use different equipment, the problem is likely with the equipment.

There is one caveat here: if your problem is, as mentioned above, a lack of proper grounding, then changing the configuration of the components in your system can often impact or mask the problem without actually identifying it. Make sure your system is properly grounded to start.

19 comments on “Why is my computer picking up radio stations and sounds?”