When my son uses his mouse on his laptop upstairs it moves the mouse on the computer downstairs? Can you help?

I’m not certain that I can, but I can certainly give you a few things to look into.

The real reason I’m addressing this question is that it raises a very interesting privacy issue that most people aren’t aware
of.


You would probably realize if this were the case – since you’ll have had to install the software – but remote-control software like VNC or similar tools can cause exactly this behaviour, because … well, because that’s exactly what they’re designed for. As I type right now, I have on my desktop computer a window that is the desktop of my Mac laptop being controlled remotely: 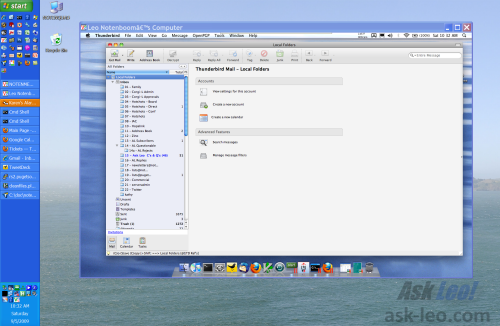 “Wireless mice use short distance radio signals to send the mouse’s instructions to the computer.”

If I move the mouse within that window on the desktop the pointer on the laptop itself moves as well, since I’m controlling it remotely. Similarly, if I type into that window it goes to the remote computer. (Remote Desktop connection wouldn’t apply here since the actual laptop screen would show the login screen rather than the actual desktop while it’s in use. With VNC and other remote control solutions you’ll simply see your computer as if it’s acting on its own while being remotely controlled.)

But like I said, since that typically requires some setup, you’d probably know if it were the case.

The scenario that’s a little less obvious are wireless mice.

Wireless mice use short distance radio signals to send the mouse’s instructions to the computer. Similarly, wireless keyboards do the same.

The problem is that it’s transmitting, so anyone in range in theory could “listen in” to signals being sent. To overcome that, various keyboard and mouse manufacturers have established a kind of handshake that is supposed to allow the mouse or keyboard to actually connect to only one computer. And finally, the data being transmitted may, or may not, be encrypted.

So, for the practical problem you’re experiencing, use a different mouse on that laptop and see if that doesn’t resolve the issue. Disconnecting any external mouse and using the internal mouse, or using a wired one would be best, at least for that initial test.

But let’s address the security issue we just raised.

I’ve actually heard of this type of wireless eavesdropping being used in corporate environments.

Well, I don’t want to foster undue paranoia – more often than not this is not happening.

My advice is simply to be aware. If you’re in a sensitive environment, consider a wired mouse and/or keyboard, or use your laptops internal mouse and keyboard which are, by definition, wired. If you need a wireless device, look for strong encryption to be called out – but do some research since certain forms of wireless keyboard encryption have in fact also been hacked and could still be sniffed.

9 comments on “Why does the mouse on one computer move the pointer on another?”