I am unable to defragment my computer. I used to be able to do this but some
6 months or so ago, I noticed I could no longer do so. I could start the
process but every time I got to around 10% defragged the computer would reboot.
Sounds silly I know but I run XP on a Celeron 26000 and have tried everything I
know to fix, short of re-installing. I am at a loss. Could you please shed some
light on my problem? Have you come across this before?

I do have some ideas, yes. My guess is that there’s something wrong with the
data on your hard disk or the disk itself. The good news is that in all
likelihood we should be able to repair it.

I would guess that the most common cause of the defragmenting software
crashing is a “logical” problem on the disk. By “logical” I mean a corruption
of the data on the disk, like the directory entries or the disks lists of areas
that aren’t in use.

My first step would be to run CHKDSK. Specifically, “CHKDSK /F”.

Fire up a Windows Command Prompt (usually in Start,
All Programs, Accessories, and type in
CHKDSK C: /f (I’m assuming C: is the drive you want to
defragment). It’ll probably ask if you want to schedule the CHKDSK for the next
time you reboot, to which you would say yes: 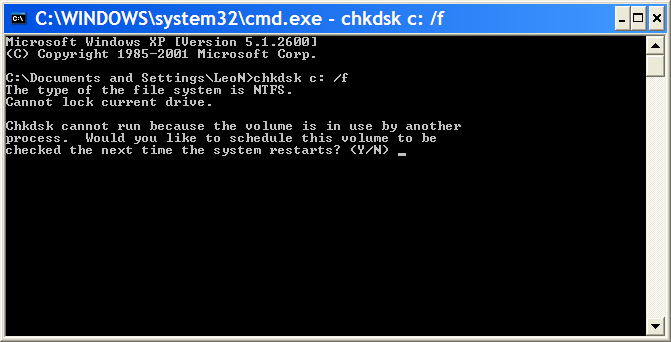 Reboot your machine, and allow CHKDSK to run to completion. Once your
machine has completed booting back into Windows, try to defragment again.

“My first step would be to run CHKDSK.”

If it still fails, I would next re-run the CHDSK command, this time using
the “/R” switch (CHKDSK C: /R). This should perform a more
thorough scan of your hard disk looking for errors and repairing them if it
can.

If it still failed, I would next run the System
File Checker to make sure that the files that comprise Windows itself are
intact. Since the disk defragmenter is a part of Windows, if some component of
this tool has been corrupted, this should repair it.

Finally, if things are still failing, then I’d seriously consider a hard
disk repair and recovery tool such as SpinRite. It’s
not free, but it has a stellar record of repairing hard disks that have or are
on the verge of failing. Since I believe that the disk defragmenter is most
likely crashing because of problems with the disk, a run of SpinRite, followed
by another run of CHKDSK, would be close to my last best guess at repairing
this situation.

13 comments on “Why does the defrag program crash on my machine?”