I have this nice new laptop, but the display is smaller than the screen. What I would normal see across the entire screen is smaller than it should be, and it’s surrounded by a black border. How do I get rid of the border and use my whole screen?

Most flat displays, like the LCD screen in your laptop or an LCD monitor
for your PC, have what’s called a “native” resolution. That’s the resolution at
which they give you the best display.

If Windows is configured to use something other than the native resolution,
things get ugly.

An LCD monitor is made up of a fixed number of pixels – those tiny colored dots that are individually lit up and set to various colors to form an image on the screen.

Let’s say that I have an LCD monitor that has a native resolution of 1280×768 pixels; that’s 1280 pixels across and 768 pixels up and down. You’ll often see that listed as the maximum resolution because that’s the limit of the display – it can’t display more pixels than it actually has.

“… the monitor has compensate for being asked to display something other than its native resolution.”

If you try to display at a higher resolution than the monitor’s native resolution – say we try to set our 1280×768 monitor to a resolution of 1600×1200 – you’re effectively trying to cram more pixels onto the screen than it has. As I mentioned above, that doesn’t work – the monitor can’t display more pixels that it actually has.

Often, Windows will simply not present the higher resolutions as an option. If it does and you set it to display a too-high resolution, your monitor may go completely black, or display wavy lines, noise, or other gibberish.

That’s why Windows has the 15-second timer after you change resolutions. If the screen goes “wonky” when you try a new resolution, just wait and Windows will revert to the old after the timeout.

It generally should work.

But the monitor has to compensate for being asked to display something other than its native resolution. It’ll do one of two things: 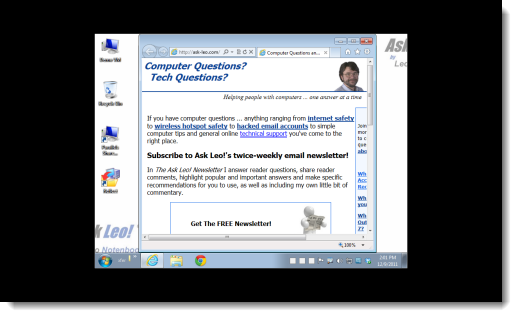 The solution: always use native resolution

The solution is very simple: Always configure Windows to use a display at its maximum or native resolution.

That way, it’ll use the entire screen and be as sharp and clear as possible.

If you’re trying to “make things bigger” by choosing a different resolution, try changing the DPI setting instead. That can change the overall appearance of what Windows draws on screen without forcing the monitor to center, or worse, stretch.

If the native resolution doesn’t appear, then either of two things is the case:

10 comments on “Why does my screen have a black border all around it?”