I have a 2 year old Dell Latitude on which the hard drive crashed a few
weeks ago. I received a new hard drive from Dell and installed Windows XP.
Everything works fine, except I have no hibernate function. Is there a step I
missed in the XP setup? Standby/Shut Down/Restart etc. all work fine, but
Hibernate is not an option.

It’s not a step so much as an option that probably just needs to be turned
on.

We’ll do that, and while we’re at it we’ll explain the difference between standby
and hibernate. 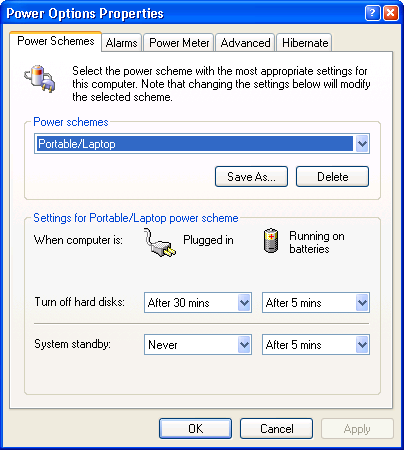 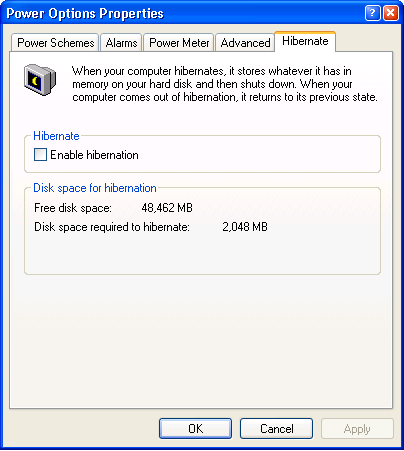 I’m guessing that Enable Hibernation isn’t checked on your
machine. Check it, click OK and you should be set. It might
require a reboot before taking effect.

So what is hibernation anyway? And how does it differ from standby?

Hibernation writes a complete image of your computer’s RAM
memory to the hard drive, and then completely powers down your machine. When
you reboot after hibernating, the boot loader then simply reloads the memory
image into RAM, reinitializes some hardware, and you’re good to go.

The key is simply that the entire state of what your machine is doing at any
point in time is almost completely contained in your system’s RAM. So the
theory is that simply saving and restoring your RAM (along with a few other
details, perhaps) should be enough to completely save and restore what you were
doing across a complete shutdown of your computer.

If you look closely at the second dialog image above, you’ll see that it
says “Disk space required to hibernate: 2,048 meg.” That’s the amount of RAM
installed in this machine, and thus that’s how much space is required to save
the RAM on disk. That image, by the way, is written to the hidden file
“hiberfil.sys” in the root of your boot drive which is always present to
reserve that space if you have hibernation turned on. One way that people free
up that disk space is to turn off hibernation.

Standby does not write your RAM memory image to disk.
Standby instead turns all your hardware off except your RAM. Thus
resuming from standby is often faster than resuming from hibernation, as the
memory image does not have to be loaded from disk – it’s still in memory.

The downside to standby, of course, is that your machine is not completely
off. Some power is still required to maintain RAM. I’ve also seen some devices,
particularly network cards, wake up periodically while on standby.

If the machine’s battery drops too low while it’s on standby, Windows will
either put the machine in hibernate, if that’s enabled, or attempt to cleanly
shut down so as not to lose any work in progress.

Both standby and hibernate have been problematic at times in the past.
Sometimes devices won’t come back up properly after one or the other, or
sometimes the machine won’t resume at all. Standby in particular requires not
only Windows support, but cooperation between the computer’s BIOS and the
various device drivers that may be impacted by a loss or partial loss of
power.

The good news it that for the most part, standby and hibernate tend to work
relatively well on current computers.

30 comments on “Why can&apos;t my machine hibernate? And how&apos;s that different than Stand-by?”