I use Windows Vista and my volume is set to 100 % but the volume is low.
This is with all applications. My driver is up to date and all speakers are
working normally according to all my checks. I can remember when my volume
would run you out of the room but recently it dropped down to almost a whisper.
It is annoying especially when playing music. What can I do to get my volume
back up and down to 45 – 50%?

Volume control has always been a tad confusing, even back in XP.

I’m not sure if the changes in Vista (inherited by Windows 7) made things
better or worse, but it’s still somewhat confusing.

As I sit here listening to music, I can count no fewer than
four volume controls that the music passes through before it
reaches my ears.


“With so many ways to control the volume, it can get really confusing.”

We’ll start with the applications that play sounds or music. Many, if not most, have volume controls themselves. Here’s VLC Media Player as it’s running on my computer right now:

You can see that it has its own volume control, which is set to 98% (it ranges from 0 to 200%). That controls the maximum volume that the application will output.

The Windows Volume Control is perhaps the confusing, or at least surprising part. If you click on the volume icon in the notification area you get the standard volume slider:

Here you can see I have it set to “33”, out of 100. That seems simple enough, and represents the maximum output that Windows will produce as a whole.

The mystery is in the Mixer. Click the link for Mixer and you’ll get something similar to this: 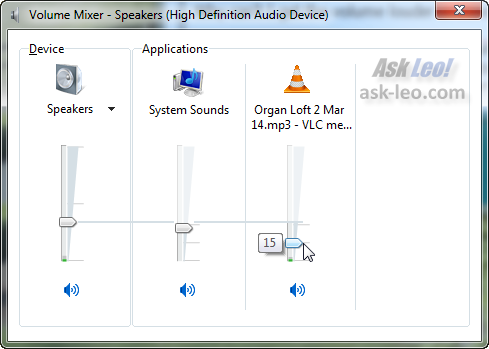 So far we have three volume controls:

The “fourth” volume control I mentioned? My speakers. Many speakers will include volume controls that present yet another way to limit what you’re hearing.

With so many ways to control the volume, it can get really confusing.

Typically, when there’s a problem with volume being too soft it’s often the result of one, if not more of these being turned down when you didn’t expect it. Since each in turn limits the volume being output by a specific application or the system, any single one turned way down will act as a limit on the volume you hear.

10 comments on “Why can&apos;t I get the volume louder in Windows Vista and Windows 7?”