I’m trying to activate Windows XP Home. I’ve just performed a clean setup, and Windows now won’t let me even log in until I activate. The network card has apparently not yet been configured, so I can’t activate over the ‘net. When I do the phone activation, the “installation ID” I’m supposed to give the Microsoft representative is blank. What do I do?

This article is here for historical purposes only. Windows XP is no longer supported, and it’s very likely that Microsoft will eventually decommission its activation servers.

That question wasn’t posed by just any reader. This time it was me.

And after an hour and a half on the phone, I was no further along.

And yet, left to my own devices I had the machine activated in about 10 minutes.

This is not good. Not at all. In fact, it’s downright depressing.

I have a Dell Latitude 131L that’s perhaps two years old. It came with Windows XP Home pre-loaded from Dell. I’d loaned the machine to a friend for a while who’d recently returned it. I used it as a testbed and installed Ubuntu Linux on it, played with it for a bit, and then left it to sit in a corner.

Today I decided that this was the machine to use for a new employee at my wife’s business. So, time to reformat and reinstall.

Now, here is the only confusing factor: the machine is a Dell, and came with Dells OEM version of Windows XP Home pre-installed. The product key for XP Home that was installed on it is on a sticker on the bottom of the laptop. Like so many of my readers, I’d lost, misplaced, or just didn’t feel like looking for the actual Dell Windows XP Home disk, particularly since I had a old pre-SP1 retail disk (purchased from the Microsoft Company Store) in front of me that I’d never used. The product key for one CD of Windows XP Home should work with any other – remember, it’s the product key you’re purchasing, not just a CD. If not, I expected it would at least generate an error when I entered it. So when I installed Windows I entered the original Dell product key, even though I was installing a retail copy of XP Home.

The thing is, it worked. Or at least it seemed to. Windows Setup dutifully accepted the product key, reformatted the entire hard drive as I requested and copied over files from the CD. It just generally seemed to be working, and working well.

Until it rebooted and hung. (Still no idea what that was about.)

I removed the CD, and hard-booted the machine, and sure enough, Windows came up except that it presented me with a message I’d never seen before, and didn’t even know existed: “You must first activate this copy of Windows before you can log in”. This was new. In my experience Windows will normally allow you to log in and complete your set-up without activating, giving you 30 days to get around to that.

OK, whatever, I decided to activate. The choices came up, I plugged in a network cable and told Windows to activate itself over the net. No. The network card hadn’t been configured yet, there was no external connectivity available. The only option was to activate Windows over the phone.

I hesitated, but having advised so many people in the past that phone activation is no big deal, I decided to live by my own words, and picked up the phone.

I’m sure that most of the time it works. But … Oh. My. God. Here’s the highly edited sequence: 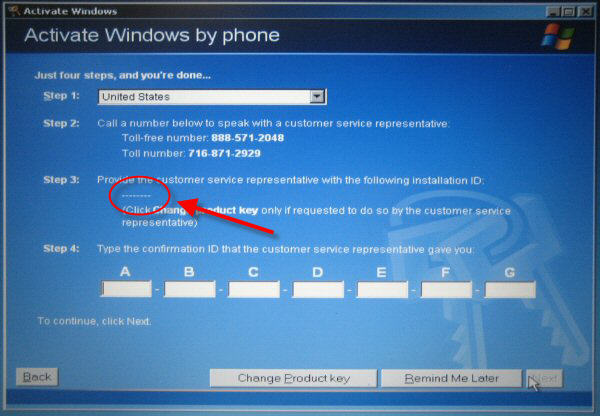 I’ve called out where the installation ID should be, and as you can see it’s
not there.

The automated phone system had no clue how to handle that.

At this point I’m about 45 minutes into it and probably would have given up had I not begun envisioning this article resulting from my experience. Any normal person would have throw up their hands at this point, I’m certain.

To their credit everyone I talked to was polite and honestly intent on getting whatever issue was in front of them resolved. (I, too, took pains to remain calm and friendly throughout. Tempting as it is, anger rarely helps.)

And I also have to point out that I totally get that remote debugging is incredibly difficult. I know, I try to do it every day answering questions here. It’s hard. But that’s exactly what we expect technical support specialists to be good at.

The problem was that ultimately, they had no clue. They were just fishing for answers. And as a result they wasted an hour and a half (and more) of my life in the process.

Very disappointing. And frustrating. I can understand that a less patient person would have had a difficult time staying civil – what I was looking for was very simple: I wanted to install and run Microsoft Windows, all legal and above board.

And I simply couldn’t.

Left to my own devices, I fixed it in about 10 minutes.

And that, to me, is the truly shameful part.

The key was my statement early on: “The network card hadn’t been configured yet, there was no external connectivity available.” That’s a statement I made repeatedly to the folks at Microsoft.

The other key was noticing that I could get into the computer by using Safe Mode.

My approach was very simple: get the network working, and then see if I could activate that way.

I downloaded network drivers for this model of laptop from Dell, and using a DVD-RW, copied them on to the laptop, which I had rebooted into Safe Mode. The setup programs for the drivers didn’t work – apparently the Windows Installer is disabled in Safe Mode. However the driver files were available.

I went to the network device in Device Manager (it had the familiar yellow question mark that indicated there was a problem), clicked “update driver”, pointed it to the folder containing the drivers for Windows XP for this laptop’s network card, and installed.

And the network worked.

The machine’s next to me as I type this, happily installing SP2, as it should.

Aside from formatting that DVD-RW, it took 10 minutes, tops.

A machine without connectivity of any sort is a problem. If Windows Setup can’t determine that there’s a way to connect to the internet ever (i.e. there’s no network adapter of any kind – even though I had networking hardware, Windows didn’t see it, as evidenced by the lack of drivers having been installed on setup), it seems like it drops back to this ultra “secure” mode where you must activate before you can even use your machine.

I also theorize that since the “installation ID” is actually comprised of information about the system, like its network adapter’s MAC or other serial number, the lack of that network adapter caused it problems too. It was unable (or perhaps unwilling) to calculate the installation ID that was necessary for me to activate by phone.

I could, of course, be wrong, but that’s what it “feels” like.

I can’t say what they “deserve”, but I can say that my experience was very disappointing, and that I have a lot more sympathy for folks who have had to go through similar scenarios, without the fall back of being able to just get things to work themselves.

If it weren’t for the job requirements, this laptop might just have ended up running Linux.

124 comments on “Why Can’t I Activate Windows XP?”