In Task Manager I have many duplicated lines, e.g CCSVCHST.EXE twice
and IEXPLORE.EXE twice but with all are different PID’S and memory
sizes. How do I stop this and clean it up? It seems a big drain on
memory. Also some progs like WINWORD.EXE don’t clear task manager when
closed but will close if I use END etc. Any ideas?

Ideas? You bet. I have plenty.

Things are actually more complex than they appear. The extremely
short version is that you actually don’t want to “clean it up”, because
things are likely working exactly as they should.

Or, in some cases, exactly as you’ve instructed.


When it comes to multiple instances in task manager, the most commonly referenced program is something called SVCHOST. Here’s a peek into my machine: 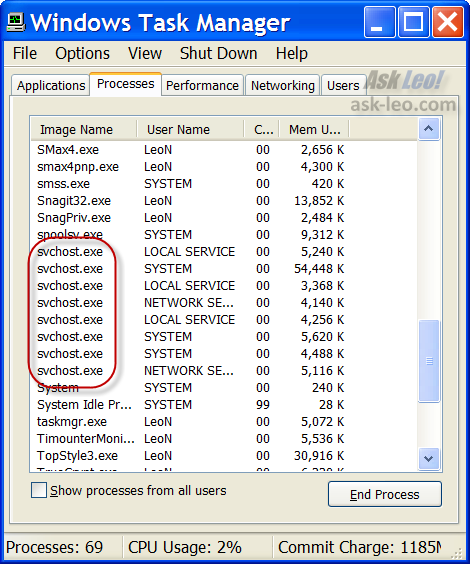 You can see I have eight instances of SVCHOST running. In fact, it’s such a common question that I’ve discussed it specifically in a prior article What is svchost, and why is there more than one copy running?

“The fact is that some programs are just designed to have multiple copies running.”

The fact is that some programs are just designed to have multiple copies running. SVCHOST is a great example, as it’s a utility “host” program for a variety of different services that run within windows. Each one may (or may not) cause a new instance of SVCHOST to appear. That’s simply how the software was written.

I can’t speak to CCSVCHST.EXE from your example, though it appears to be a part of Norton internet security. I would assume that it too is there twice by design, and terminating or preventing one instance from running would potentially break some important aspect of what Norton does. Again, having two instances of CCSVCHST.EXE is likely because that’s how the software was written and what it expects.

They’re there because you asked for them.

Again, this is actually really common as people fire up multiple browser windows to look at multiple sites and do multiple things all at the same time.

With IE there’s a catch that can be really confusing, though. Note that I said to start it again “via the start menu or desktop icon”. That starts a new copy of IE from scratch. However, if in a running copy of IE you type CTRL+N for “New Window” you’ll get another IE window, but it’ll be from the same IEXPLORE.EXE process. In other words, you won’t see a new IEXPLORE.EXE created when you type CTRL+N, even though it’ll pretty much look the same as having started a new IE from scratch via the Start Menu. Like I said, a tad confusing if you’re trying to keep track.

So that’s one way to control the number of processes created for IE at least – use CTRL+N instead of the start menu to open multiple windows.

But aside from browsers, most programs don’t provide that kind of functionality. They fall into either of two camps:

Now, about those processes that won’t go away when you close them.

In many cases it’s actually a “feature”, though I’m more likely to consider it an annoyance.

I see it most often in Outlook, and here’s how it works: depending on how you “close” the application, it actually closes the window but not the program. As you’ve seen, the program continues to run without any visible window on the screen.

Why? The typical reason is that the software designers are betting that you’re very likely to run it again, and leaving it running will make it look like it was able to start up much faster the second time.

As for me, I’d prefer to make that decision myself, thank you.

What I learned with Outlook (through trial and error, I’m afraid) is that if you close it by just closing the window (clicking on the “x” in the upper right, or typing ALT+F4) the window will close but the application may keep running. On the other hand if you click on the File menu and then click on Exit, the entire application actually closed.

For all I know that’s changed by now, and I’m also fairly certain that other applications may not react the same way to that same magical incantation. But it’s worth experimenting with, though be sure to give the applications some time to disappear as well. Quite often they’ll make their window disappear instantly, to look like they closed very quickly, but the process may hang around for a while performing cleanup and other tasks before it finally exits.

Ultimately, though, it’s also not really a problem unless you’re experiencing some symptom that can be traced down to the application still running. In my case, it was years ago when I was trying to copy Outlook’s PST file and couldn’t because even though not visible the program was still running and had it locked.

For 99% of users, I honestly wouldn’t spend a lot of time being concerned about it.

16 comments on “Why are there duplicate entries in Task Manager, and how do I clean it out?”