About once a week I go into Internet Options and delete temp files, cookies
and history. I also run the disk cleanup utility. I use CCleaner and run it in
default mode to clean out system temp files, memory dumps, file fragments, etc.
And finally, I open up a command prompt (as you suggested in a previous
article) and run cd /d %TMP% and rd /s . to
really clean things out.

Then today I read an article that said to use the XP search function and
search for *.tmp, *.chk, ~*.* – the article said be prepared to be amazed at
how many temp files it will find.

I ran the search and it found 116 files taking up more than 1.2GB of space
on my computer!! My questions should be obvious: with all the other cleaning
tools I’ve used, where the @#$%&! did these come from, why haven’t they
been previously deleted? Some go back more than a year ago when I had to
reformat/reinstall XP!

You know, I’d forgotten about all those files when I wrote that prior
article about deleting
files in the Windows temporary folder.

In a way, I’m somewhat surprised that the Disk Cleanup Utility didn’t at
least make an attempt. But then again, I also understand why it couldn’t
possibly get it right 100% of the time.

These files show up and accumulate for various reasons, but the two most
common are:

When you open a document in Word, if you then examine the folder containing
that document, you’ll also find an additional, hidden file:

But, note my use of the word “normally”. If, for some reason, Word or my
computer crashes that file remains. In some cases if you open the same original
document in Word, it’ll notice that the temporary file is present, and actually
use it for the “auto recovery” feature. Sometimes it won’t. And if for some
reason you never open that exact same document in that exact same place,
there’s no one to come along and delete the temporary file.

And so they accumulate, along with other temporary files from programs that
crash, or programs that simply misbehave and leave things behind.

Usually. Typically. Most of the time.

And that’s why the Disk Cleanup utility can’t actually just delete these
files. There’s actually no guarantee that the files are expendable. For all we
know, a program could be storing incredibly valuable information in “.tmp”
files. It’s silly, downright stupid actually, to do so, but there’s nothing
that says they couldn’t.

This is one of those cases where the Windows Search for Files or Folders is
quite useful. Firing it up and searching my hard drive for
*.tmp results in this: 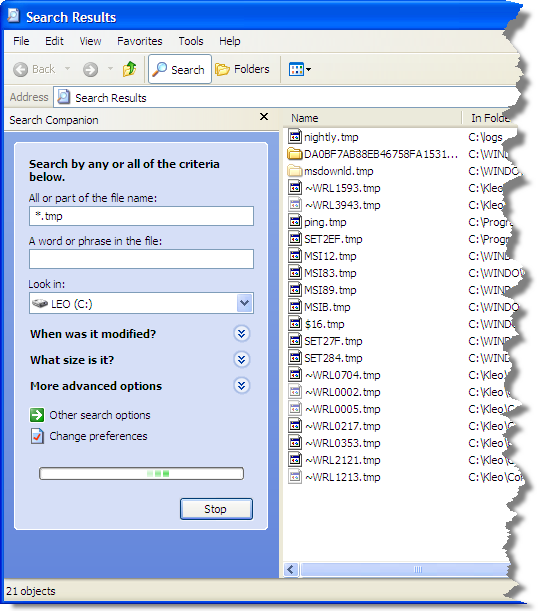 As you can see, even on my machine where I do tend to keep things relatively
clean, there are lots of “.tmp” files left around. This screen shot was taken
during the scan – when it finally completed there were 31 files, but one of
which was half a gigabyte in size. CTRL-A to select
’em all, and SHIFT-Del to permanently delete them, and I had
that disk space back.

I repeated the process for ~* found another 28 files, but
only around 26k of space, and *.chk still another 9 files and
34k.

The real question you should be asking is: is it safe? Since Disk Cleanup
isn’t taking the risk, should I?

99 times out of 100 it’ll be just fine. An appropriate compromise before
deleting any file you’re not sure of is simply to either rename it, move it to
a different location, or heck, burn it to CD. That way if you find later that
you needed the file you can restore it.

But in the scenario I just walk through in writing this article and cleaning
up my machine I didn’t bother.

7 comments on “Where did all these other temporary files come from?”