When I try to attach a document to emails I have discovered that the
recipients cannot open them. They’re telling me that there’s a ‘docx’ on the
end of the subject. I didn’t have this problem with my old computer, I now have
a gateway XP Pro.

I’m going to guess that with your new computer you also got some new
software. In fact, I’m going to further guess one of those new software
packages is Microsoft Office 2007.

If that’s the case, then what we have here is a classic cross-version
compatibility issue. Fortunately there are two ways to solve the problem.

You can solve it, or your recipients can.

“.docx” is the new file extension that Microsoft Word 2007 uses when it
saves documents in the new default format. So you might save your document as
“letter”, but what Word 2007 writes to disk is “letter.docx” where previous
versions would write “letter.doc”. (I assume that “.docx” means .doc
“extended”, but that’s an unimportant assumption.)

As I said there are two possible solutions.

Save in the old format

In Word 2007, rather than just hitting Save, click on the
“Office Button” to drop down what we used to think of as the “File” menu, and
hover the mouse over Save As:

Note that I’ve called out the option so save as a Word 97-2003
Document. This will save the file in the format used by these earlier
versions of Word, and will do so with the normal “.doc” extension.

If you always want to save in the older compatible format you can
click on the Word Options button (always visible at the bottom
of the menu displayed with the “Office Button”), and then click on
Save at the left of the resulting dialog: 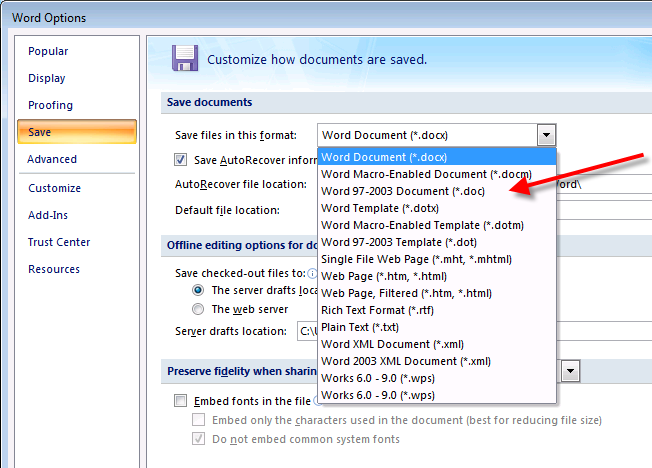 As you can see, you can select the Save files in this
format dropdown. The default, as you might expect, is Word
Document (*.docx). Change that to Word 97-2003 Document
(*.doc) and your documents will be saved in the old compatible
way.

“‘.docx’ is the new file extension that Microsoft Word
2007 uses when it saves documents in the new default format”

Open in the new format

I actually covered this in a previous
article: there is a “compatibility pack” that users of older versions of
Word (and Excel and PowerPoint) can download and install to enable those
versions of the product to read the newer file formats directly.

In your scenario you would do nothing different. You’d keep sending out the
new “.docx” documents. Your recipients, however, would all need to download and
install the converters to be able to read what you’ve sent; or upgrade to
Office 2007.

Which is the right solution for you depends on your situation. If your
recipients expect to have lots of .docx files coming their way or just want to
be ready if and when they do, then perhaps asking them to install the converter
isn’t that big a deal. On the other hand saving in the older formats to begin
with minimizes the impact on them – at least for documents that you
send.