I’m hearing a lot of backlash against Windows 7 for a completely unexpected
reason; not for incompatibilities or instabilities but for the removal of
Outlook Express.

Outlook Express was actually removed in Windows Vista, being replaced by
Windows Mail. That, in turn, was removed from Windows 7, and replaced with …
nothing. The official approach is to download Windows Live Mail, which is very
Outlook Express-like.

But it’s not Outlook Express.

It turns out that, yes, Windows XP Mode might be a solution.

It’s not terribly simple, but it can work.


Before I start, I do need to be clear: I’m not actually recommending this as an approach to using Outlook Express, specifically, in Windows 7. Not only is this somewhat cumbersome just to read email, but Outlook Express in general has enough problems that I’d strongly recommend moving away from it now. It just isn’t worth this effort.

“I show this … as an example of the kinds of things that Windows XP Mode can be used for.”

I show this in part for those diehards that must have Outlook Express at any cost, and as an example of the kinds of things that Windows XP Mode can be used for.

Windows XP Mode is more than a “mode” – it installs an actual copy of Windows XP Professional as a virtual machine within Windows 7. That means you can run Windows XP within a window in Windows 7. 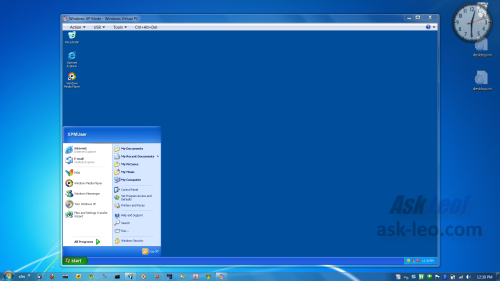 Within that copy of Windows XP you can run and use all your standard Windows XP programs, including Outlook Express: 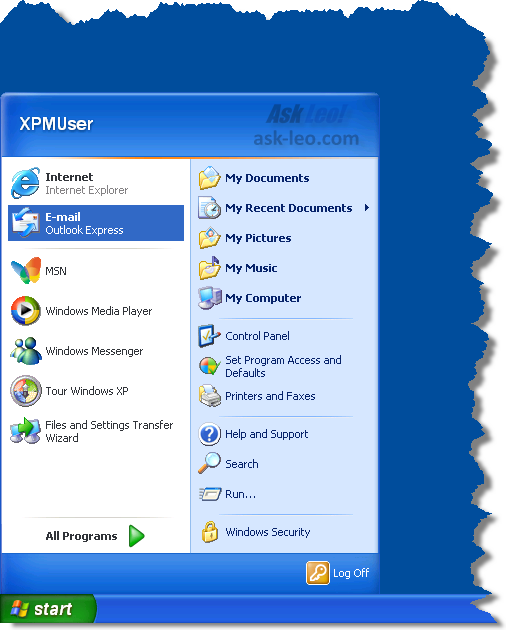 Getting Windows XP Mode in Windows 7

Windows XP Mode is not included in the actual Windows 7 disks; it’s a free download from Microsoft.

Windows XP Mode required Windows 7 Professional or better and a computer with a CPU capable of hardware assisted virtualization (the download page includes a tool that will tell you if you have this). I also recommend a huge chunk of disk space, and some patience – the download is over 500 megabytes.

Once downloaded the setup is actually very simple – the standard licensing term agreement and not even that many options or choices. 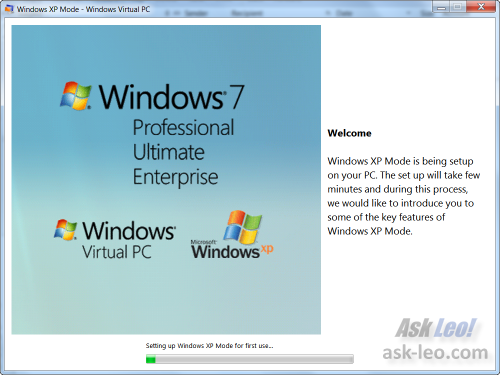 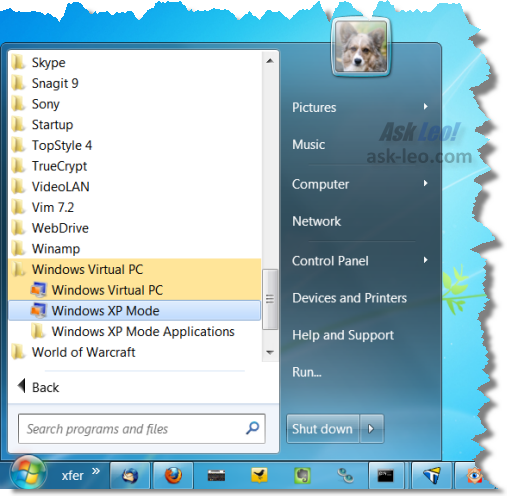 Run it and you’ll find Windows XP running – in its own Window – on your machine running Windows 7.

I Have XP Mode, Now What?

Now that you’re running Windows XP within a window, here’s the simplest way to think of it:

That means installing things like security updates, anti-malware software and whatever else you would do to a new machine that you’d just set up using Windows XP. 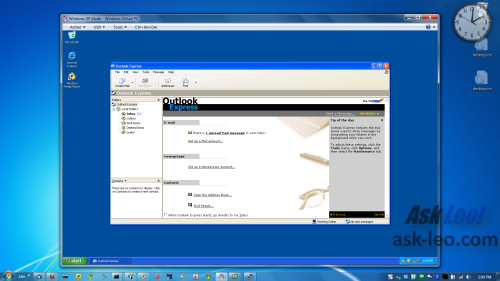 By default, Windows XP Mode also makes all the drives on your Windows 7 computer available from within the virtual PC: 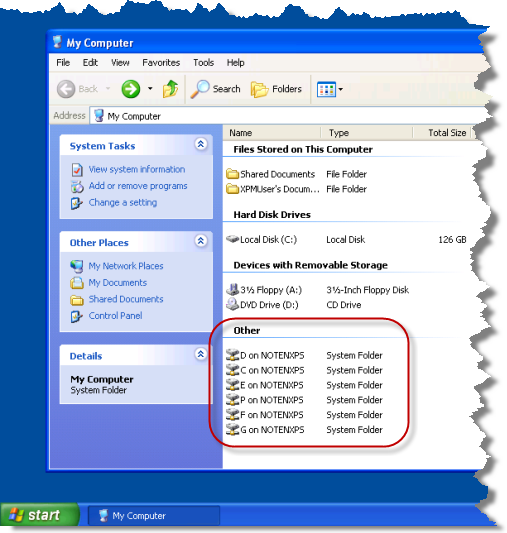 As you can see above, all the drives on my Windows 7 machine – including any mounted volumes and local area network connections I might have – appear as folders accessible from within the Windows XP virtual machine, making data transfer in and out of the virtual machine a snap.

I’ve actually just scratched the surface on Windows XP Mode – Windows Virtual PC includes many features designed to make integration with legacy applications fairly easy. All we’ve really done above is setup a virtual machine, run it, and run one application within it.

All in all Windows XP Mode can be a very useful tool for overcoming compatibility issues, particularly with older software for which there may not be a Windows 7 alternative. While I don’t actually recommend this approach for Outlook Express, the fact that it can be used shows just how much is possible. In effect, every copy of Windows 7 Professional or better includes this “free Windows XP” just for the downloading.

28 comments on “What is Windows 7&apos;s "Windows XP Mode"? (And can I use it to get Outlook Express back?)”