The fact that you don’t develop software actually has nothing to do
with anything here.

.NET is most likely used by other software you have installed on
your machine.


To cut to the chase: I wouldn’t delete a thing. It possible that you do, in fact, need all those different versions of .NET – or not. We could go through a long exhaustive search to see which programs you have installed might require one version or the other, but in my opinion it’s just not worth it.

OK, just what is the .NET framework?

To grossly oversimplify, it’s a package of common support software that can be used by programs so that they don’t all have to re-write the same software over and over again. More specifically, it’s aimed at users of Microsoft’s newer versions of programming languages like C#, Visual Basic .NET and others. The .NET framework provides a broad array of functionality that can be used by programs written in those languages to perform common tasks, most commonly things that involve interacting with Windows itself.

So you may well have programs installed on your machine that rely on the .NET framework, and thus deleting .NET will cause that program to fail. Over time, more and more programs have come to rely on .NET, so chances are actually pretty high that you have at least one and perhaps more that rely on .NET.

You get the .NET framework either of three ways:

Now, about those versions. 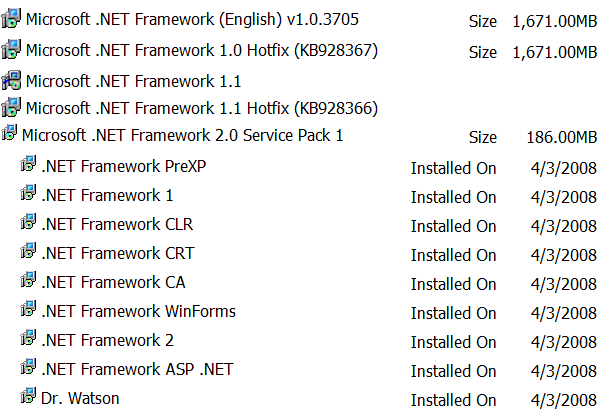 The .NET framework versions installed on my machine

Apparently the .NET framework isn’t “normal”. For example, software that requires .NET framework version 1 might not work if only version 2 is installed. In fact, you’ll already note that while most software upgrades replace the previous versions, .NET framework installations do not. If you install version N+1, version N remains.

But the solution is simple: leave them there. Yes, they eat up more disk space, but unless you really know what you’re doing or want to spend a lot of time experimenting (back up first!), just leave them there and get on with your life.

Rumors are that the mess will get cleaned up in a future version, but in all honesty, I’m skeptical.

62 comments on “What is the .NET Framework, and do I need all these versions?”