Fire up
Process Explorer or Task Manager in Windows to view the running processes
and you’ll see something called “svchost.exe”.

As I write this, there are no less than 11 copies of svchost.exe running in
my Windows 7 64-bit system.

To understand why this is expected, we need to understand a little bit about
why svchost exists and what it does.

Svchost, as the name implies, stands for Service Host.

Many components of the Windows operating system are actually implemented as
what are called “services” – a fancy name for programs that run in the
background and aren’t necessarily associated with whomever is logged into the
machine.

You can quickly see which services are running by typing NET
START in a command window, or by right-clicking on your
Computer icon, clicking on Manage, clicking
on the small triangle next to Services and Applications to
expand it, and then clicking on Services.

On my machine, “Net Start” shows me 76 running services on my machine. The
Services interface shown above displays all installed services and an
indication of whether they are running or not.

There are many things that are common to all services: how they start, how
they interact with the system, and how they manage the administrivia of running a system
service. Rather than writing a complete service from scratch, many
are implemented as a type of program run by another program.

That “host” program is our friend svchost.exe.

Svchost.exe is designed to be the host for one or more actual services. It’s
the program that gets run, and when it gets run, it’s instructed which service
to run. The actual service is typically implemented in a DLL that svhost.exe
accesses.

As it turns out, a single copy of svchost.exe can actually “host” several
different services at once.

Hover your mouse pointer over one of the svchost.exe instances in Process
Explorer and a tool tip will show you exactly which running services are being
hosted by that particular copy of svchost: 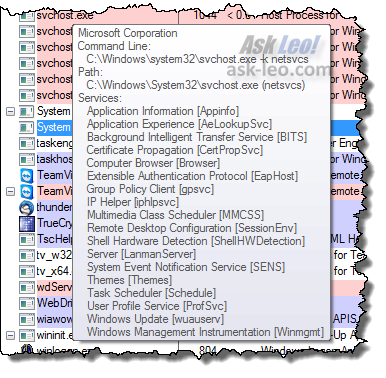 In this example, the pop-up shows that this single instance of svchost.exe is
actually hosting 18 separate services. Other instances typically host fewer,
often only one. Which copy of svchost.exe hosts what service is a function of
how the services relate to each other and when they are required by the rest
of the system.

Because it’s expected that there will be multiple copies of svchost.exe
running and its workings are quite mysterious to the average computer user,
malware authors have long leveraged the confusion around it to hide or at least
obfuscate their doings.

As I said, the confusion around svchost has become a tool that malware
authors have used to to either worm their malicious code onto machines in the
first place and/or try to hide its presence once installed.

Svchost.exe is not malware

I’ve seen a number of panicked questions that immediately jump to the
conclusion that svchost.exe is, itself, malware.

Svchost.exe is a required system component and Windows will simply not run
without it. If it becomes infected, it’s possible that attempts to
clean it up by deleting or quarantining it may result in a system
that doesn’t work.

As we’ve seen above, malware often tries to look like svchost, or
it tries to run using svchost, but that doesn’t mean that svchost.exe
itself is malware.

(This is an update to an article originally published
October 20, 2003.)

What is
svchost.exe? – Microsoft. Written for Windows Vista, but applies to all
recent versions.

82 comments on “What is svchost, and why is there more than one copy running?”