About 5 minutes after booting up Vista, the taskbar turns white. It
does the same thing after rebooting. Changing the settings to Aero
under appearance settings will sometimes return it back to its “glass”
state, but it turns white after another 5 minutes.

First the “Blue Screen of Death”, then the “Black Window on Boot”,
and now… a white window?

The other thing to know is that the Windows taskbar is just another
application. A special application, perhaps, but when push comes to
shove, it’s an application just like any other.


In Windows, as you might expect, each program or application is responsible for filling in or “drawing” whatever it wants to show you in the areas it’s been assigned on your screen – its window. 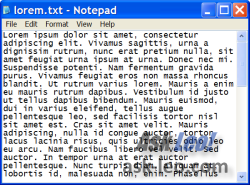 When Notepad, for example, wants to show you its menu bar and the area in which you can type, it’s responsible for actually drawing the images of the menu items that you see across its top, and then also “drawing” the editing area that you see on the screen. (Yes, pedants, it may have help from system functions, but it’s still the application’s responsibility.)

Windows tries very hard to cut down the amount of work each application needs to do by only asking it to draw what actually needs to be drawn. For example, if you cover up half of Notepad’s window and then uncover it, technically it only has to re-draw that part that was covered. Windows tells the application “you need to redraw this area here” and it’s up to the application to figure out how to do that. It can elect to redraw everything, or just the parts that it needs to, to restore the content of its window completely.

But again, it’s the application that’s doing the work in response to Windows asking it to.

The white window can happen when for some reason the application can’t.

You’re probably asking “ok, why couldn’t it?” – well, there’s no simple answer. Applications are fairly complex beasties, and there could be many different reasons. Sometimes the window remains white only for a short time while the application is busy doing something else. The most common reason for a permantly white window is that the application itself has crashed, hung or otherwise failed in some way that’s preventing it from redrawing its window. But in reality, it could be for any of a thousand reasons that might differ from one application to the next.

Windows will, in some cases, blank or fill with white the area that the application needs to fill in, and then tell the application to go repaint it. Normally, you never see this because the application quickly does so. When it fails to do so, you’re left with a white window.

The Windows Task Bar is actually a window owned by the application “explorer.exe” – the same application that also displays Windows Explorer windows. It’s “special” in that it’s launched automatically when you login, and the first instance of it is responsible for creating the task bar and a few other things.

It’s also special in that if you kill it, Windows will notice and start it up again, automatically.

So that’s certainly something to try: fire up task manager or Process Explorer, locate “explorer.exe”, and kill it. 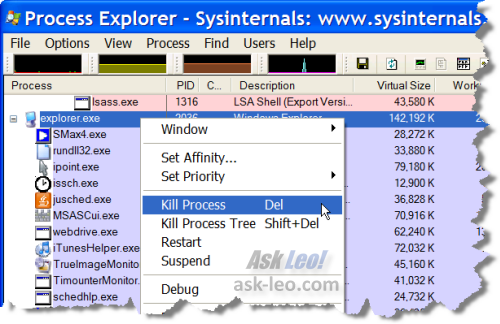 This should make your white taskbar disappear, and within a few seconds the taskbar should reappear normally.

Unfortunately, this doesn’t address the root cause and it’s likely to reoccur. In a situation like this, I would typically suspect malware of some sort, or perhaps a corrupt system file. The old standby is where I’d start: run up to date anti-virus and anti-spyware scans, and perhaps the System File Checker.

3 comments on “What does it mean when a window turns white?”