What does it mean when my computer wont boot up and it says system fan error
and check system fan?

Don’t get me wrong, I’m not trying to be curt, but the message means exactly
what it says: you need to check the fan in your system.

Fair enough, let’s review one of the most under-appreciated components of
your system.

Almost every computer has one or more fans that blow air through the inside
of the computer case. This is true for laptops as well as desktops. In fact,
the system fan is a critical component. If the fan fails your computer may
overheat and damage other critical components.

There may be more than one fan.

For desktop machines there’s typically at least one fan in or near the power
supply. The power supply itself can generate a fair amount of heat, and having
a fan nearby not only keeps it cool, but also ends up moving air through the
rest of your computer’s enclosure. 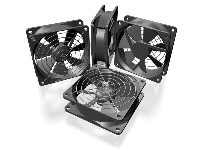 There may sometimes be a second fan near the front of the computer, just
behind the faceplate. This fan, in conjunction with the fan at the back of the
computer, helps to keep air moving through the computer. One will push
air in, and the other will pull air out.

In some cases there’s yet another fan, directly on or over the CPU. The CPU
is another source of a great deal of heat. Placing a fan near the CPU itself
keeps cooler air blowing over it to help dissipate some of that generated
heat.

As I said, the system fan is a critical component. So critical, in fact,
that in recent years additional circuitry has been added to computers to allow
the computer to monitor the fan and make sure it’s working properly.

On this there’s no standard that I’m aware of.

My recommendation: check them all. If your system is failing to boot because
of a problem with one or more of its fans, it’s important to check it out.
You’ll need to open the case and see which one isn’t working. If you’re not
comfortable doing that, particularly if you have a laptop, then you’ll need to
take your machine to a technician for diagnosis.

11 comments on “What does "check system fan" mean?”