I’m checking out the trial version of Parallels to
run Windows XP on my Windows Vista system. So far, I like it a lot. Yet I’m
concerned about viruses and surfing the net using my XP-“guest” virtual
machine. I’ve searched online and can’t seem to get an answer on if I
need to install antivirus software on my guest machine as well? Also do
I need to reinstall all applications on my guest machine? I see that I
can share folders but can I also share apps?

Virtual machines are, to me at least, incredibly amazing pieces of
technology. They’re powerful in that they let you run multiple
different operating systems on the same machine at the same time, as
well as really being able to protect that machine from whatever happens
within a virtual machine.

The problem, of course, is that it’s very difficult to conceptualize
what a virtual machine is.

The short version is consider your VM as if it were a completely
separate physical machine, and make your decisions accordingly.

Let’s see why that is.


A virtual machine or “VM” is a software simulation of an actual computer that you run on a real computer.

Seems simple in words, but harder to imagine.

So let’s look at this picture of a part of my desktop: 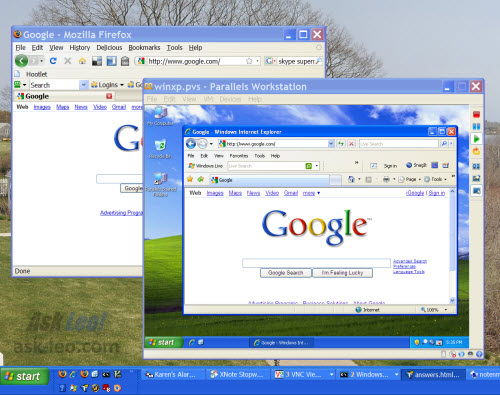 You’ll notice that there’s a Windows XP taskbar along the very bottom of that screen shot. That’s the task bar of my Windows XP that runs on my desktop machine where I’m working.

In the background you’ll notice a Firefox Window open on Google.

“… it’s a separate machine that through the magic of virtualization just happens to share some hardware with the host machine.”

In the foreground, however, you’ll notice a Window that also has its own taskbar and start menu. That is a window to a virtual machine using Parallels Workstation that is also running Windows XP. And within that window you can see I’m running Internet Explorer, also open on Google.

The virtual machine acts almost exactly as if it were on its own physically separate computer. It has its own Windows, its own Start menu, its own software, registry, users and settings. It also has disk space allocated to it that it treats as its own separate hard disk. In fact, other than being hosted on my desktop, what happens inside this virtual machine is almost entirely unrelated to and separate from what happens on my desktop machine.

And that’s by far the best way to think about it: it’s a separate machine that through the magic of virtualization just happens to share some hardware with the host machine.

So, in light of viewing it that way, let’s look at your questions again:

The point of confusion may be the fact that you can easily share files between your VM and your host machine. But think about it: you can share files between two separate computers as well, via networking. In fact, that’s all that VM/host file sharing is – a form of network-like access between the VM and the host machine. The two remain as if they were two separate and distinct physical machines.

Virtual machines are incredibly powerful for certain applications if used properly. But by far the best rule of thumb to follow when understanding how they work is simply that they are separate machines.

4 comments on “What do I need to set up using my Windows XP virtual machine software?”