You’ve stumbled onto a common problem. In fact, it’s typically the cause of
the “I only see two dots” complaint.

The good news is that there are services out there that make this
very easy to deal with.

In order to post a picture into a MySpace comment or picture caption, you
need to actually type in HTML, the “language” of web pages. What you’re typing
in is the instructions that says “put that picture, here”.

The link we’re talking about, called a URL, is this part:

If that’s too long, then MySpace will not display the picture, and may
display something else, like the two dots, instead.

We need to create a shorter URL.

The easiest way to do that is to use a service like SnipURL. Visit http://www.snipurl.com and you’ll see this: 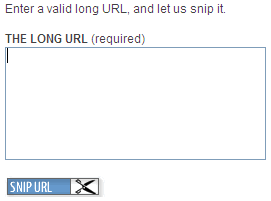 On the SnipURL site, enter the “long” version of the URL that you have.

Important: do not enter the actual file name – the
characters following the last slash! Only enter everything from the “http” to,
but not including, that last “/”.

So, using our current example, I would enter this: 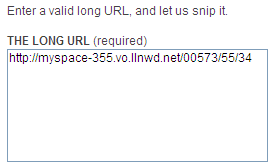 Now, press the SNIP URL button. The resulting page will
show you your now much smaller URL. In my case, I get: 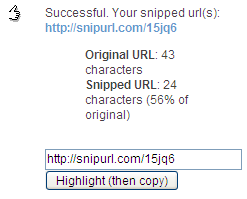 Now we’ll put the new SnipURL together with the filename:

is now just a short version of:

Which you can now use anywhere you would have used the longer version.

So, to come full circle, in our MySpace “picture in a comment” example,
instead of:

after creating the SnipURL, we would use this instead:

As you can see, it’s much shorter.

Caution: in putting together this article, I attempted to use a
similar service called “TinyURL”. I’m not certain, but it appears that MySpace
is actively preventing TinyURL from being used in cases like this.

As a result, I’m not certain of the future for SnipURL. However, for the
moment, I was able to confirm that everything above, when followed
exactly, works.

118 comments on “The link I want to use to post a picture on MySpace is too long, what can I do?”