Headlines make things seem worse than they are.

We need updates, yet they can cause problems. How aggressively should you update your Windows 10 machine?
Applies to Windows: 10
For the average user who doesn’t frequent questionable web sites or open email attachments unless expecting them, how important is it to be a “seeker” and try to update Microsoft updates on the day they come out, rather than waiting a few days to see what kind of problems they are causing?

The news we hear is contradictory: there seems to be a never-ending stream of vulnerabilities that we need to Fix Right Now, but it seems like taking those fixes represents a risk as well. How do you choose what to do and when?

To me the answer is pretty clear.

Updates are significantly more stable than headlines would make it seem. While there are no guarantees, updates generally work and work well. Because there are no guarantees a backup, not avoidance, is your best approach to safety. In general letting Windows Update take updates on its own schedule, automatically, is the best approach for most. If you’re working on a problem you believe might be addressed by an update, then proactively seeing them out is great.

Things are better than they seem

I need to address an implicit assumption in your question: that updates cause problems. This is difficult to explain, but I’m going to try.

The chances of a Windows 10 update causing someone a problem is very high — 100%, even. Someone, somewhere, will have a problem. Probably even more than one someone. It’s all too complex for it to be otherwise.

The chances of a Windows 10 update causing you a problem is extremely low.

Let’s say a million machines are adversely impacted by a Windows 10 update. That seems like a lot, right? A disaster, even. Many news outlets will go out of their way to portray it that way: an unmitigated disaster! “Update cripples hundreds of thousands of Windows 10 machines! Clearly, Windows 10 sucks!”

Its makes for wonderfully click-baity headlines.

If we step back and measure against an installed base approaching1 one billion machines, however, all it means is that your machine has a 1-in-1000 chance of being affected: 0.1%.

Put another way, your machine has a 99.9% chance of having no issues at all.

Updates should work, and for the most part, they do

I am in no way making excuses for an update that cripples a million machines — it shouldn’t happen. Period.

But if it does, it shouldn’t be taken out of proportion to its real impact on your machine. A 99.9% chance of working is pretty good.

I pulled the “one million machines” number out of the air. I think most of these issues affect fewer machines, and none of those numbers take into account the severity of any issue at hand. Some are serious and some are benign, which also factors into calculating the risk to your specific machine.

I stand by my position: regardless of the headlines, most Windows updates work.

Not all, but most.

For those who feel my position is misguided, and that Windows 10 Just Doesn’t Work: Why Did You Recommend Software that Doesn’t Work?

There are no guarantees

“Most” is not “all”. I get that. And there’s no way to predict whether a specific Windows Update problem will somehow affect your machine.

That’s OK. Most of the time, it works just fine.

And if it doesn’t?

Backups. Restoring a recent image backup makes the problem go away. Take additional steps to avoid or delay the problematic update, and you’re back at work like nothing happened.

So, answer the question already!

All that was a lengthy diatribe on why headlines may scare you, but Windows Update should not.

Should you proactively take the updates as soon as you possibly can?

This may surprise you, but for the most part, I believe not. I think it’s perfectly fine to let Windows Update do its magic in the background, and deliver and install updates at whatever pace it deems appropriate for your machine. You don’t need to take any additional steps.

There is, of course, one exception to my rule: if you have reason to believe you are in imminent danger.

Aye, there’s the rub. As I implied earlier, most of the tech and news media have a tendency to portray issues as being significantly more serious than they are. But like every case of “crying wolf“, that means when there really is a serious issue, it’s lost in the noise. We don’t pay attention.

All I can advise is awareness and skepticism. Pay attention to the news, but be skeptical of it. Pay attention to the details — a vulnerability in the Enterprise edition, for example, may affect thousands of high-profile Windows corporate users, but it won’t affect you if you’re running Windows 10 Home. A problem that arises for users of specific video hardware won’t affect you unless you have it.

Both examples might make for “end of the world” headlines, but neither affect you at all.

On the other hand, if it’s clear that the issue does apply to your situation, then by all means, pull up to the Settings app and check for updates.

And if, like me, you’re just curious, hitting “Check for updates” is generally safe any time. I’ll even say 99.9% safe.

But always have that backup ready, just in case.

Why is it important to complete Windows updates?

The most important reason to complete Windows updates is that many of the updates are for security issues. Without the fixes, your machine would remain vulnerable to malware exploiting those security issues. Generally, the publication of fixes implies the bug being fixed is known to hackers and thus they can actively write malware to exploit it. By taking all fixes you’re protected.

Why is it recommended to set important updates to install automatically?

Updates should generally be installed automatically so that your security isn’t reliant on your remembering to take them manually. With automatic updates, your computer is protected whether you remember or not — even whether you’ve used it recently or not. The only real downside to automatic updates that some experience is the occasional need to reboot your machine. When notified that your machine should be rebooted to complete the update process I recommend doing so as soon as it’s convenient.

How do I know if a software update is legitimate?

Updates to Windows come through the Windows Update application with the settings app. Anything appearing in a pop-up or other non-standard way is highly suspect and not to be trusted. When it comes to the other software on your machine once again unexpected alerts should be viewed very skeptically. Use the software in question to “check for updates” instead of accepting the alert, or visit the software manufacturer’s download page to check for a more recent version yourself. 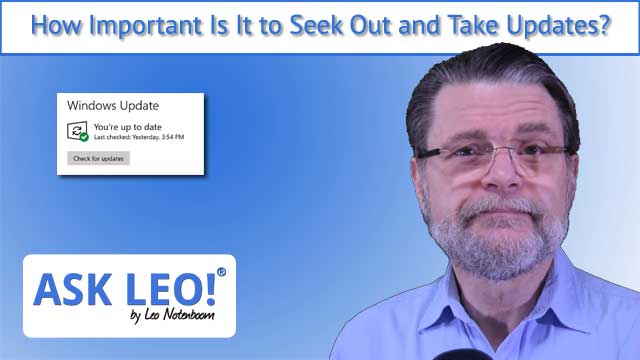 1: If not already surpassed.

5 comments on “How Important Is It to Seek Out and Take Updates?”