Is it possible to recover data from an external hard drive that was deleted a year ago?

This is another question that gets my most common answers: “maybe” and “it depends”.

It might be possible to recover old data from an external hard drive — or any hard drive — as long as a few conditions are met.

I’ll review what those are, and then I’ll recover some files from an external drive I recently formatted.

The conditions for success

There are several things that conspire for or against successful data recovery. The more of these conditions that are met, the higher the chances you’ll be able to recover old files.

If you formatted, you used quick format

I suspect that accidentally formatting the wrong disk is one of the more common reasons folks need data recovery success. The good news here is that as long as you didn’t specify “full” format — in other words, you opted for a “quick” format — you dodged a large bullet. A full format overwrites the entire hard drive, rendering its contents inaccessible to mere mortals.

You’ve not used the drive since deleting anything

You’ve not used the drive for “much” since deleting

You’re looking for something small

If they can be recovered at all, small files are more likely to be completely recovered than large files. The larger the file, the higher the chances that intervening use will have overwritten portions thereof.

You get lucky on layout

You just get lucky

There’s just no getting around the fact that if the drive’s been used for anything that involved writing, previously deleted data is at risk. A good portion of successful data recovery boils down to sheer luck on where the desired file happened to be written on the disk, and whether any of it has been overwritten in the time since it was deleted.

My tool of choice for data recovery is Recuva, from Piriform, the folks that make CCleaner2.

A few days ago, I formatted an old 500GB external drive that I hadn’t used in a long time. I fired up Recuva and had it scan the drive. Its quick scan turned up nothing, but it offered a “deep” scan, warning it might take some time.

True to its word, five hours later, it had completed.

Apparently, I had stored music on this drive at some distant point in the past. While Recuva was able to list the files, and claimed over 109,000 files were found, my attempts to actually recover files were unsuccessful. The files recovered were not the actual, original files, and could not be played.

This goes to show that when it comes to file recovery, time is of the essence, as is lack of activity. This might be my oldest external drive3, and it was used heavily. Clearly, all that use invalidated the information on the drive, preventing successful recovery of its prior contents.

It is possible to recover information from old hard drives, but so much depends on exactly what was done with the drive since the original data was removed that it’s nearly impossible to say with any certainty what will be there.

As soon as you realize that you may need to recover deleted data from any drive, stop using the drive. 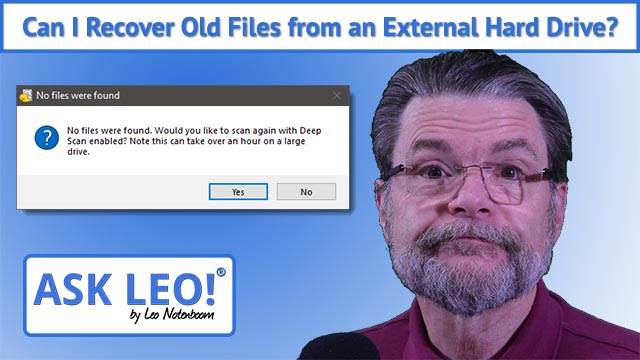 1: In concept. Various disk formats have differing strategies on where to place data on hard drives so as to minimize wear, so it’s possible that this might not even apply. But you could get lucky.

2: As with CCleaner, you do not need to pay — the free version will do just fine — and you should always watch the install options for any unwanted extras or PUPs.