I followed your instructions to create a file association for PPS files, but
I still get an error when I try to open PPS files attached to email. What am I
doing wrong?

It’s hard to say, but I will say that for some reason, PPS files cause a lot
of people consternation.

Let’s review what you should do, and what to do if that doesn’t work.

Now, as I stated in my previous article
This file does not have a program associated with it – what does this mean and
what do I do?, the most common solution is to simply install the program
that understand PPS files. If you don’t have Microsoft Office, that means
downloading and installing the free PowerPoint Viewer. Setting it up should
create all the appropriate associations for you to be able to view PPS
files.

If you have Microsoft Office, you can perform a repair install, making sure
that PowerPoint is, in fact, installed.

Unfortunately for some folks all that doesn’t appear to work. Very well,
we’ll do things the hard way … meaning we’ll do it by hand.

I’m going to assume you have successfully installed the free PowerPoint
Viewer.

Fire up Windows Explorer (right click on My Computer and
click on Explore is one quick way). Click on the
Tools menu and then the Folder Options item.
In the resulting dialog, click on the File Types tab, and you
should see something like this: 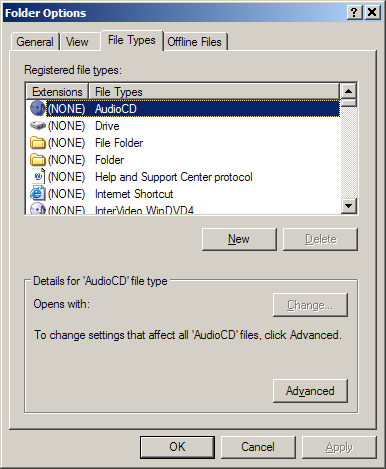 Scroll down to the PPS entry, or where the PPS entry should be
alphabetically. If you don’t find a PPS entry, click the New
button and enter PPS into the resulting dialog to create one. 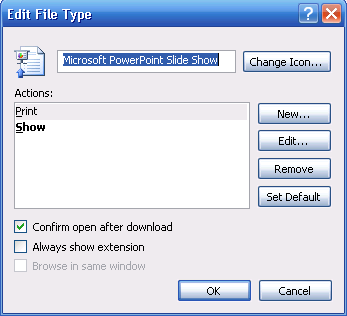 For the moment we’ll ignore the entry that says “Print”, and focus on the
other – “Show”. What seems to be unique about PowerPoint Viewer is that it
doesn’t use the word “Open”, but rather “Show” as the action to perform. My
theory is that that’s the cause of much of the confusion.

into the Action box, and then:

“What seems to be unique about PowerPoint Viewer is that
it doesn’t use the word ‘Open’, but rather ‘Show’ as the action to
perform.”

If you did have a “Show” option, or you just created one, you can check it
by clicking on “Show”, and then clicking on Edit…. The
result should look something like this: 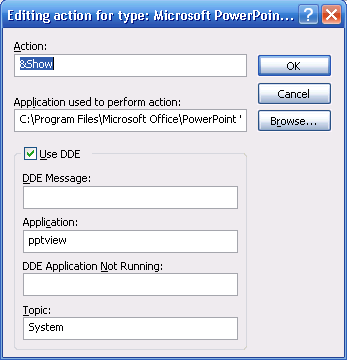 Note that even though it’s not entirely displayed, if you click in the field
Application used to perform action:, and scroll to the right,
you’ll see it contains the entire string:

Press OK, and you should be back at the “Edit File Type” dialog pictured
earlier.

Important: click on the “Show” action, and then click on
the Set Default button. The “Show” item should turn bold, as
seen in the image above. This tells programs which action is the “default”
thing to do with a PPS file under certain conditions.

OK and Close your way back out, and you
should now have a proper association.

Note: as I said this assumes the free PowerPoint Viewer, which you’ll have had to download
and install, and it assumes you installed it to its default location. If you’re
using PowerPoint itself, you’ll need to locate “powerpnt.exe” on your hard disk
and enter its path instead of “pptview”.

If you’d like to create the “Print” action, the steps are the same, except
that the Application used to perform action: is:

Thanks to one of my readers for pointing out the potential role of “Show” in
people’s confusion on this issue.

Update: Ramesh’s Site includes an article Unable to open .PPS attachments directly from
Outlook Express? which includes not only instructions similar to the above,
but a utility that you can run to install the fix for you.

58 comments on “PPS files still don&apos;t work even after I created an association – what do I do?”