And yet, you hope that you’ll never, ever need them.

The reality is that chances are you will.

I’ll walk you through the steps required to restore a backup system image to
your system.


Boot from the Rescue Media

Restoring a system image – meaning restoring an image of your system drive that normally contains your running operating system – requires that you boot from the rescue media that you created shortly after getting your backup program. Perhaps the hardware died and you need to restore to a replacement hard disk. Or perhaps the system is so malware-infested that you can’t (or don’t want to) boot from the installed system.

Regardless of the reason, this is when you want that bootable rescue media.

If you didn’t make one, you’ll need to use a different computer to do so now, before you can proceed. 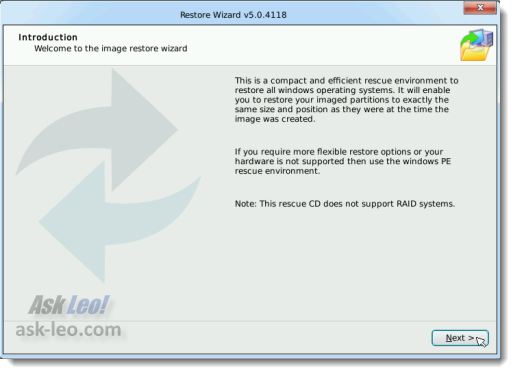 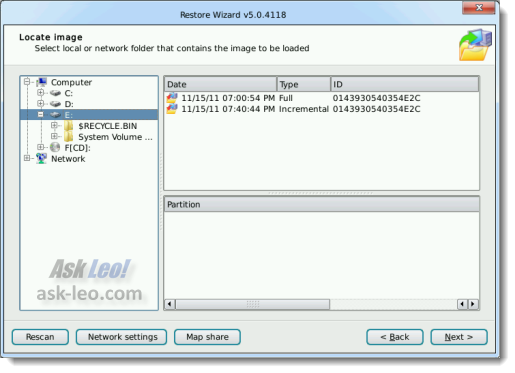 First, you’ll need to tell the wizard which backup image you want to restore.

Important: The drive letters shown here may not match the drive letters that you’re used to seeing. In this case, the formerly “hidden” system partition is visible and has been assigned drive letter C:. What we consider C: is identified as D:, and what was D: is E:. Be sure to examine the contents of the drives (just click on them and you’ll be able to navigate their contents in the right-hand pane) to be clear on which drive is which. These drive letters are only temporary during the restore process, and reflect the fact that Macrium Reflect is accessing all partitions, hidden or otherwise. After the restore when you reboot back into Windows, the drive letters will reflect your normal reality.

Our backups were placed in the root of our D: drive in previous examples; that drive is now referred to as E: in the Restore Wizard.

Click the drive containing your backup images and then click the image that you want to restore. Typically, that’ll be the most recent incremental backup taken. During the restore, the original full backup and all incremental backups up to and including the one that you select will be applied. 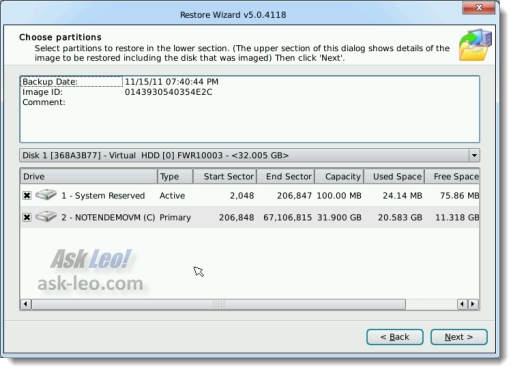 On the next screen, the wizard has examined the backup image that we selected and is asking which partitions contained should be restored.

Our backup included both the System Reserved partition, as well as the partition containing C:, and we’ll select both. (The wizard will likely already have pre-selected both for you.) 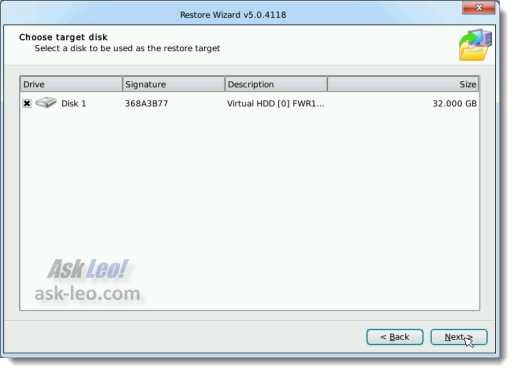 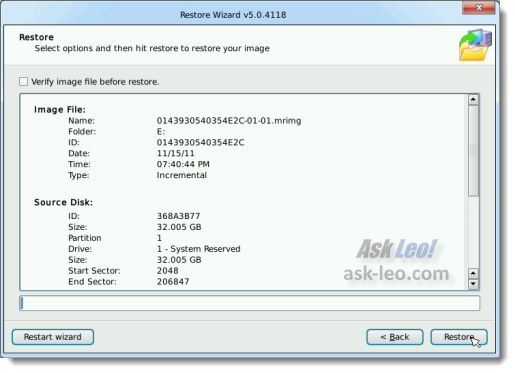 Finally, with all of the decisions made, the wizard displays a summary. Review the summary and if it looks good, click Restore.

After a Yes/No confirmation, the restore begins. 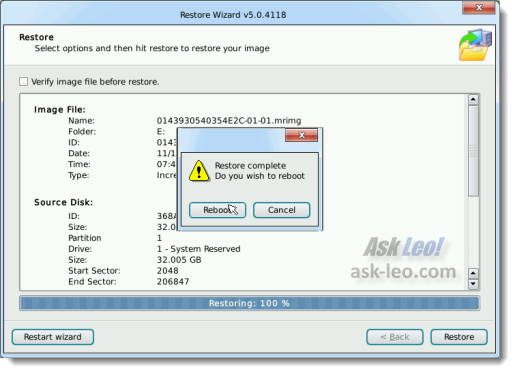 When the restore is complete, remove the rescue media disc and click Reboot.

Your machine should now reboot into the restored copy of the operating system.

Restoring an image to your machine.

What we’re going to do is restore a backup image of our entire C: drive to the machine we took it from, thus overwriting the existing contents of the C: drive with the image that was taken with the backup process.

We’ll boot from rescue media CD. In doing so, the first thing that we get is the option to run Macrium’s rescue CD directly or a memory test program. In this particular case, we’re going to go ahead and let Macrium rescue start.

Macrium boots and goes directly into the restore wizard. We’ll click on Next. Now, one of the interesting side effects of booting using a completely different operating system is that the drive letters that we originally understood to be C: and D: are now relabeled. What used to be C: is in fact the D: drive and what used to be the D: drive that contains our backup images is in fact named E:. This is only the naming convention for the rest of the restore and doesn’t actually reflect any change that might happen when we’re finished.

We will select the incremental backup – the most recent backup that we took; we’ll click on Next. We select here, where the backup is to be restored and in fact, Macrium selects the same partitions that the backups originally came from.

Typically, there will only be one target disk to restore the backup to. Once again, we end up with a summary of the actions to be taken and we click on ‘Restore’. After confirming that we indeed want to do this, Macrium begins its operation.

Once the restore is complete, you can remove the boot CD and hit Reboot. Your system will now reboot into the restored copy of Microsoft Windows.

The next video in the series: Macrium Reflect 7: Restoring a File.