Now that we’ve installed Macrium Reflect and created some backups, it’s time
for the computer to take over the task.

Scheduling backups to happen automatically without you having to do a thing
is critical for ongoing protection.

I’ll walk you through setting up a scheduled backup using Macrium Reflect. 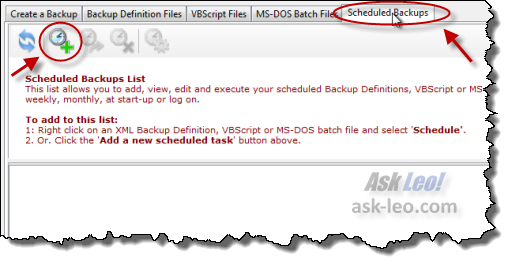 Because we haven’t scheduled any backups yet, click the green plus icon to add a new one. 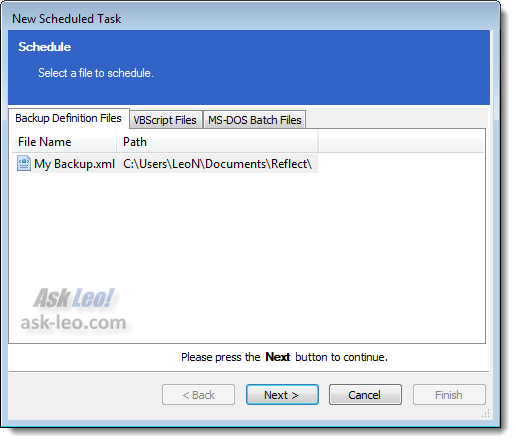 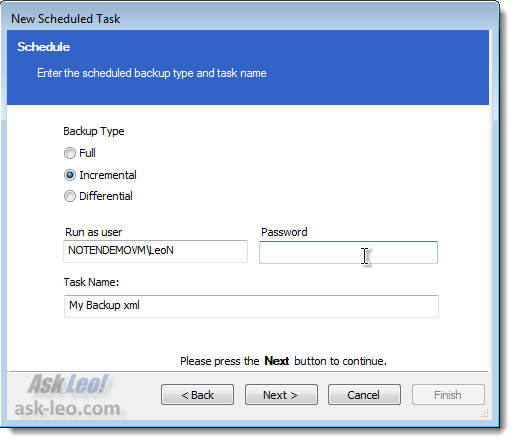 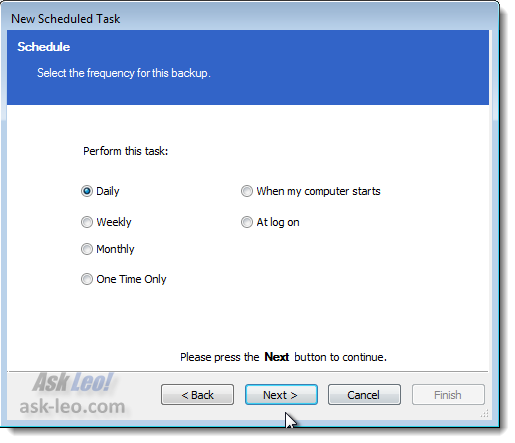 Next, you need to select how frequently you want this backup to happen. In general, I recommend that you select Daily. 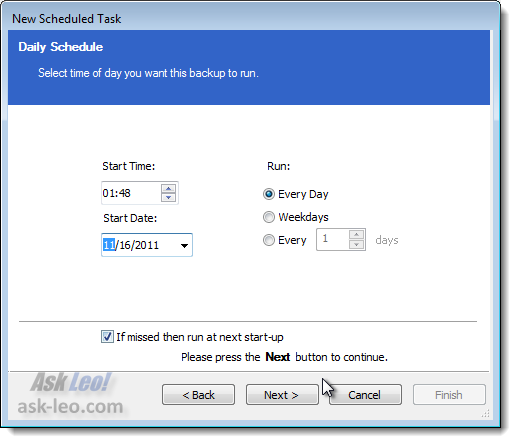 Enter a start time that your computer is likely to be on, but not being used. I tend to select random times in the middle of the night because I leave my computer on all of the time. Most folks should just select “Every Day”, although perhaps a business computer used only during the week might select only weekdays.

“If missed then run at next start-up” is a decision for you. If the computer is not running at the scheduled backup time, there are two alternatives:

Backups are important enough that, unless you have specific reasons, I recommend leaving this checked and performing a missed backup at the next start-up. 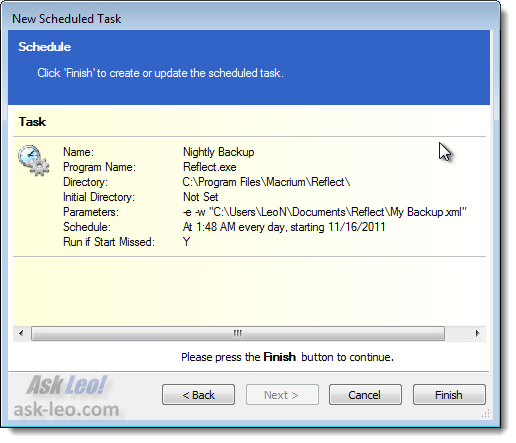 Finally, you’re presented with a summary of the backup options selected. Click Finish and you’re done.

You can close Macrium Reflect at this point if you like. It’s scheduler will make sure that the backups happen according to the schedule and options that you’ve set.

We will call this an incremental backup. Since this will happen at a time when you’re not actually logged in, you’ll need to provide your account credentials. We’ll be logging in here as me with my password. And the task name can be whatever you like. ‘Nightly backup’ is a good one since that’s the basic idea behind what we’re attempting to do here. We’re going to do this daily. I’m going to pick an arbitrary time of 1:48 in the morning and we’re going to start tomorrow and we’ll run ever day.

‘If missed then run at the next stat-up.’ This is an option you can choose if you want to. The trade-off is that the back-up will be running when you start using your computer and it’s possible that your overall performance may be affected. If you choose to not run at the next start-up, then it’s important to leave your machine running to make sure that the backup happens at it’s next scheduled opportunity.

Macrium shows us a summary of the settings we’ve chosen and we’re done. We now have a nightly backup that will run every morning at 1:48 and will perform an incremental backup of the entire machine. Each night, things that changed the previous day since the previous backup will be collected into the incremental backup. At this point, it’s actually safe to go ahead and close Macrium Reflect as it will have added it’s own scheduled tasks to its own software or to a Windows task scheduler so that the software will in fact run at the appropriate time.

The next video in the series: Macrium Reflect 6: Restoring an Image.