Regarding the option of using a complete disk image backup versus a files backup only: I carefully read your recommendations and understand the difference between the two and the advantage of having a full image backup for the case that the computer might fail to start or the hard disk might become unusable. But, along with this, from some more reading, I understand that a full image backup (including the operating system) can only be helpful if you have to restore to a machine having an identical or almost identical hardware. Otherwise, a full image restore probably will not work. What about the case that you have to completely replace your machine with another one having (most probably) different hardware? If you only have a full image backup of the previous machine, is it still possible to use this backup for restoring the entire system? Or will it be much better to have a file backup of all of your software programs installation *.exe files (setup) plus all your data, and, even at the expense of having to reinstall the entire software, to be able to rescue the entire contents instead of NOT being able to restore at all?

There’s a lot of confusion around what you can and cannot do with an image backup.

As you say, because it’s a complete snapshot of your machine, an image backup can be used to completely restore everything that was on that machine at the time that the
backup was taken.

But what if the machine changes?

Things may get slightly more complicated, but that image backup is still critically valuable.

When it comes to backups, the term “image” can mean either of two things: 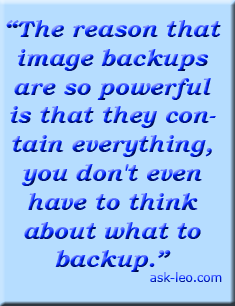 For purposes of our discussions here, the difference doesn’t matter. You may hear them referred to as images, clones, or copies, but as long as every bit of data is there, regardless of what it is, I’ll simply refer to it as an “image backup.”

Image backups are typically specific to the machine

When you take an image backup of your C: drive, you’re backing up all of Windows in addition to your data.

That means the backup contains Windows as well as all of the machine-specific drivers and settings for that particular machine.

The net result is that an image backup of your system drive is optimized so that you can simply restore it back in its entirety and it’s ready to go.

When the hardware changes, things get … interesting.

The scenarios outlined here that involve anything less than restoring the image to a hard disk and booting from it are making a huge assumption.

They assume that you can.

For example, not all backup software creates images such that you can extract individual files. Sometimes, the only thing that the image can be used for is restoration to the hard drive – sometimes, only the exact same sized hard drive in the exact same machine.

I believe Windows own backup program may fall into this category and it’s one reason why I don’t recommend it. (I’d love to be proven wrong, by the way.)

The ability to extract individual files from an image backup is critical, in my opinion; it’s a requirement of any backup software that I use or recommend.

An optional approach to that last step is to install a second hard drive, or use an external hard drive, and restore the image backup to that. That way, once running, you can simply access all of the files that it contained.

The reason that image backups are so powerful is that they contain everything; you don’t even have to think about what to backup. You may not need the entire backup when restoring to a new machine, but you’ll still want it for your data files.

Because everything that was on the drive is there in the backup.

Occasionally, an image backup can be used very close to its optimal way: restore the complete computer directly from the image.

That’s perhaps the best-case scenario for new hardware. It might be followed by some partition management if the hard disk that’s being restored to is a different size than the original, expanding the restored image to take up all available space.

Another scenario that I’ve heard of that works occasionally:

Naturally, that assumes that you have your installation media available.

And finally, a third scenario is emerging:

I don’t have any direct experience with this scenario and remain somewhat skeptical that all possible hardware configurations could be handled, but the goal is laudable and promising.

As I mentioned above, because an image backup contains everything on your hard drive, it’s nearly the perfect safety net. Even if you can’t use it for a complete restore of that image by definition, it contains every file on that hard drive. Without needing to remember what to backup, you have everything and can recover your data no matter what.

19 comments on “Is an Image Backup Useful if I Need to Restore to a Different Machine?”