We use Visual BASIC for DOS, ver 1.0, to compile BASIC programs on Win 98SE and Win XP computers. The compiler doesn’t work in Vista. Is there some way in which we can get the compiler to work under Vista? If the programs are compiled in XP, the programs run on Vista.

Boy, now there’s a blast from the past. It’s quite possible that you might actually be using software that I had a hand in creating, many years ago.

I can’t guarantee that this will work for any specific program (like VB-DOS), but Vista does include some compatibility tricks that may be able to help.

Using Windows Explorer, locate the executable you’re attempting to
run. Typically, that’ll be somewhere in “c:\program files\product\whatever.exe”, but since we’re talking legacy programs here that might not be the case. I don’t recall where VB-DOS installed itself for example. 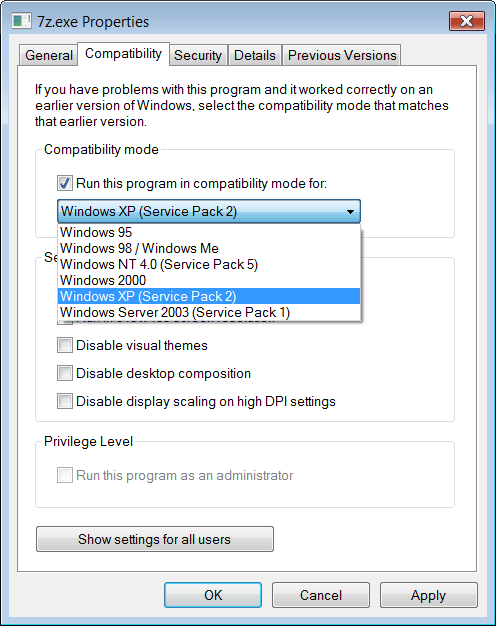 “Vista does include some compatibility tricks that may be able to help.”

For many programs you can select Compatibility Mode and choose a prior version of Windows that this program requires for compatibility.

Partly obscured by the example above are these settings as well:

Some older programs are sensitive to these particular characteristics, and Windows Vista allows you to specify that this particular executable should be run with the modifications listed.

There is one potential issue that’s easy to overlook, and tools like VB-DOS remind me of it:

There may be more than one executable involved.

For example, if I recall correctly, when you compile a program in VB, it actually runs the compiler separately, and the compiler is a separate executable.

So if the compiler has problems running in Vista, then you’ll need to repeat this process for that executable as well. Depending on what program you’re running, there may be additional executables as well that could need to be configured like this.

Occasionally, I’ve also seen the options in the Compatibility tab be grayed out. You probably need to be running as administrator to begin with, but even so I’ve seen it grayed out at times still. My assumption is simply that this option is not available for all programs.

In a case like that, depending on the urgency of your need, another approach might be to actually run Windows XP (or even an older version) in a Virtual Machine within Vista. Then you’re not just being compatible with the older version of Windows, you’re actually running
it. Products like VMWare, Parallels, or Microsoft’s own Virtual PC can be used to create and run virtual machines.