After the tiled start-up interface, the most common complaint I’ve heard so
far about Windows 8 is that applications started from a tile start up full
screen.

In fact, it’s a different full screen than in previous versions –
you might say that the applications are “fuller” screen, with no apparent way
to minimize, restore, or in some cases, even exit the application.

While that appears to be partly true for some applications, it’s fortunately
not the case for many more.


Starting an app from a tile 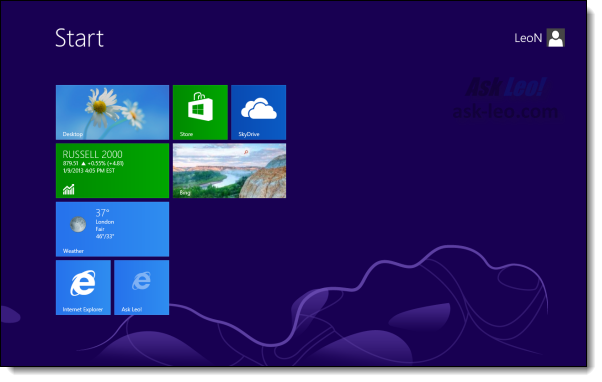 As you can see, I’ve already customized it quite a bit to remove most tiles that I don’t use and add a tile for Ask Leo!. 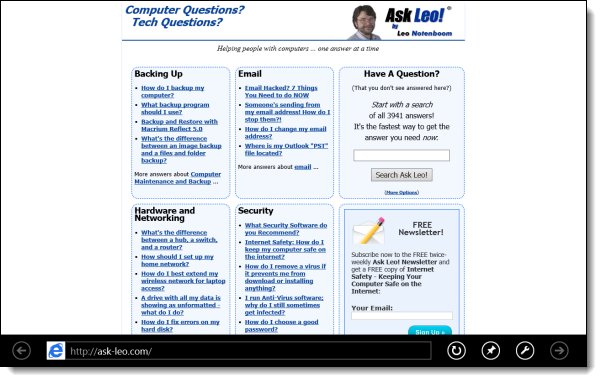 The shortcut opens Internet Explorer 10 in a full-screen mode with no traditional window borders or control, no menu, and just a minimal address bar with a couple of controls at the bottom of the screen.

It’s actually not a bad interface for browsing the web as almost all of the UI clutter is removed.

But what if that’s not what you want? What if you really do want to view your browser and something else at the same time?

Moving an app to the desktop

Click on the wrench icon at the bottom of the window: 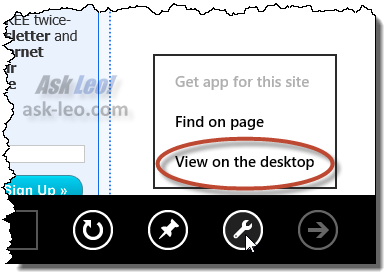 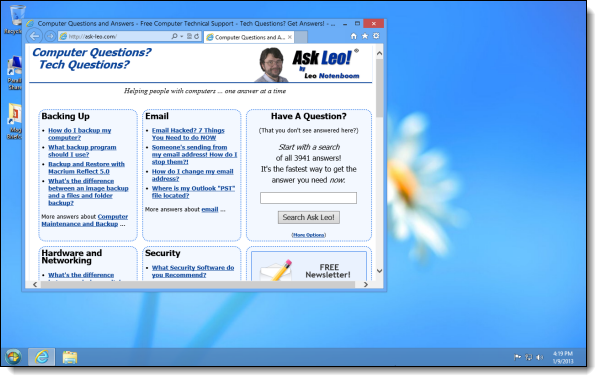 Now, you might think that the previous full-screen view that we started with is the same as “maximized” view. Apparently not.

Click on the maximize icon and Internet Explorer dutifully maximizes: 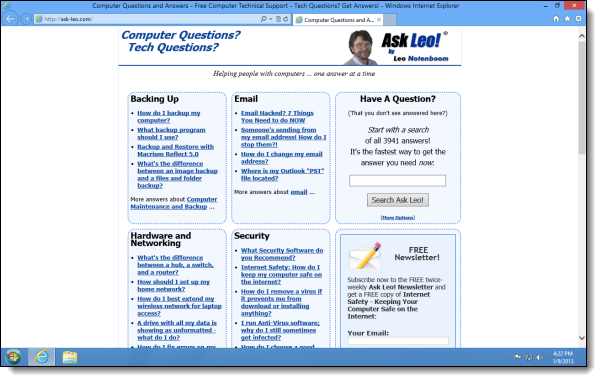 But it maximizes on the desktop, meaning that the task bar is still there, as is the Internet Explorer title bar and other traditional controls. Not like what we started with at all. Even F11, IE’s “full screen” view doesn’t return to the same look as starting it from the tiled start menu.

But at least we can restore, minimize, resize, and such like we used to do in previous versions of Windows.

Unfortunately, not all applications can be displayed on the desktop.

Apps that work only one way

I’ll use the Bing tile as my example. Click on it and you’ll get the Bing home page, displayed full screen: 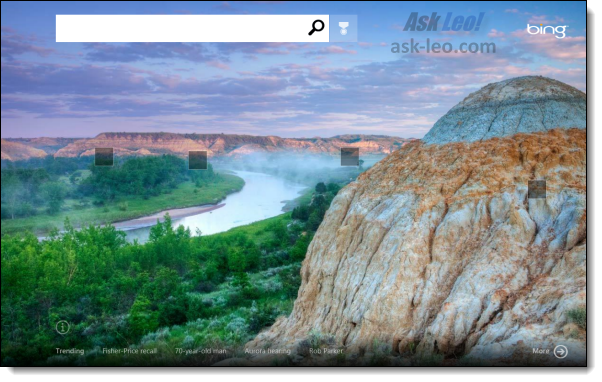 I’ve found no way to move this application to the desktop. It’s simply a full-screen tiled app, period.

The good news, though, is that when you perform a search and then click on one of the results, the Bing application fires up Internet Explorer.

Which, as we’ve seen above, you can move to the desktop.

My belief is simply that some applications – or more correctly “apps” or “applets” – meaning smaller applications – have been written to specifically and only work full-screen, in the tiled-like mode. Those can’t be resized or moved aside or displayed along side another.

But even though they don’t appear to have a Close button, they can be closed.

Closing without a Close button

Here’s an example of search results given by the Bing application: 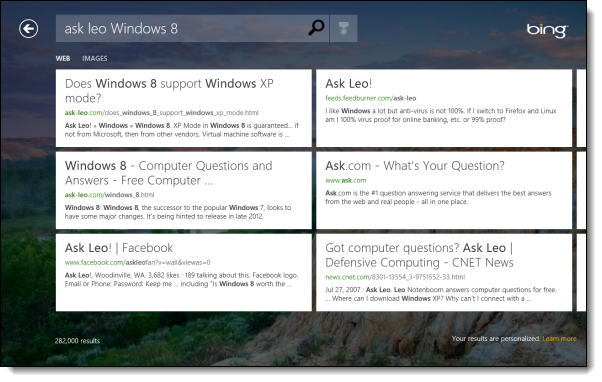 As you can see, there’s plenty to click on to go to any of the results, but there doesn’t seem to be a Close button, or a File > Exit menu or anything that would make it clear on how to actually exit the program.

So, we go old school, and reach for the keyboard.

Hold down ALT and press F4. That’s the standard Windows keyboard interface to close a program.

And it still works.

There’s been a trend in portable devices to remove the concept of “closing” an application. The idea is that you use what you use, stop using what you’re done with, and let the system worry about what’s running or not. If the system needs more resources, then an application you haven’t used for a while might be “really” closed without your having to think about it.

When you click on an application’s shortcut to start or return to it, it’ll either return – if it was never “really” closed – or restart, if at some point the system actually did cause the application to stop running.

The theory is that this is all transparent to the user.

However, new applications written for Windows 8, particularly the smaller ones like the Bing application (that might not even have any state to save) can certainly work in this manner.

Or appear to work in this manner.

Hence, there’s theoretically no need to close them.

I don’t know about you, but I’m still of a mind that when I’m done with an application, I want to close it.

22 comments on “How do I view a full-screen application in a window in Windows 8?”