Recently, my husband had trouble installing a wireless router and enlisted
the help of D-Link, the manufacturer. The staff instructed him to disable the
Microsoft firewall. Now the warning about the computer being at risk is
constantly showing. My husband told me not to worry because the router is
acting as the firewall now. Is he correct to assume that? If not, what should
we do?

Your husband is half right. The router is, in fact, acting as a firewall.
But, technically, only half a firewall.

But not to worry. I run with only half a firewall myself.

And I get no warnings.

Let’s look at how.

The trick, of course, to remaining safe in this situation is to be smart
about the other ways that you can get infected – don’t open attachments you
don’t trust, don’t visit websites you don’t trust, don’t allow untrusted
activex controls, and of course run regular anti-spyware and anti-virus scans
and so on.

It’s what I do. I don’t run a software firewall – I rely solely on my
router, and on my own “good behavior”.

“The trick, of course, to remaining safe in this
situation is to be smart about the other ways that you can get
infected…”

Now, about that annoying warning.

The Windows firewall is on by default. In fact, after Windows XP service
pack 2, the firewall became downright annoying in an attempt to encourage
people to do something to stay safe. If you do, or know, nothing else,
Windows wants you to turn on the firewall just to stop the annoying
message.

The other approach is to tell Windows “I know what I’m doing.”

In Control Panel, double click on Security
Center. You should see a dialog box including something like this: 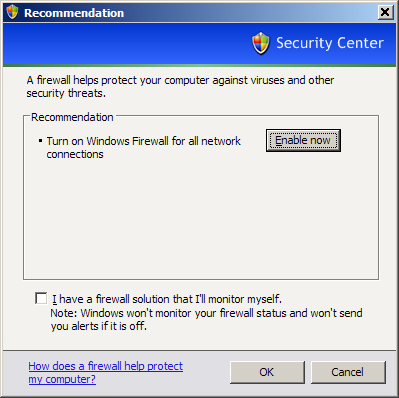 Don’t turn the firewall on, but instead check the box labeled “I
have a firewall solution I’ll monitor myself.“

Once you hit “OK” the Firewall status in the Security Center will change to
“Not Monitored”:

That’s the setting that, essentially, tells Windows “Stop bugging me, I know
what I’m doing.”

19 comments on “How do I turn off the Windows firewall warning?”