How do I get rid of Data Execution Prevention? Such a pain. It wouldn’t
allow me to view photos inside a photo folder … I followed the route given by
the “crash message” but I want it off my machine. Any ideas?

First let’s be clear: Data Execution Prevention, or DEP, isn’t something you
“remove” or “get off your machine”. It’s simply a feature that can be turned on
or off, or be configured.

I’ll show you how to turn it off, but then I’ll tell you why you shouldn’t
and what you should do instead to solve your problem.

Start by realizing that as far as your computer is concerned, everything is
just numbers. The text you’re seeing? That’s all stored as numbers with each
number representing a different letter or character. Programs that you run?
Numbers too: the instructions that tell the computer what to do are simply
numbers.

From that example we can draw an important distinction: there’s “code”, or
the instructions that tell a computer what to do, and there’s “data”, the
information that the computer works on. But both code and data are stored as
numbers.

Now, what hackers and virus writers have been able to do is exploit
unpatched vulnerabilities that allow them to a) put what they want into data,
and then b) trick the computer into executing that data as if it were code.
That’s one way they gain control of a machine and infect or otherwise
compromise the machine.

Data Execution Prevention is exactly what it sounds like: the operating
system, using either hardware, software or both, depending on the processor’s
capabilities, traps the attempt to execute data as if it were code. It’s a very
effective technique at blocking malware even if the vulnerability being
exploited hasn’t even been publicly exposed yet.

So what’s the problem?

Some legitimate programs execute data as if it were code on
purpose. Without getting into a lot of geeky details, it’s sometimes an
effective way to write very efficient code. If I’m not mistaken, older versions
of Windows did something very similar to speed up graphics operations, for
example. Since you mention viewing pictures, I’m guessing you were using an
older version of IrfanView which was also known to do this.

You can, if you like, turn off DEP completely.

At this point you should be looking at a dialog much like this one: 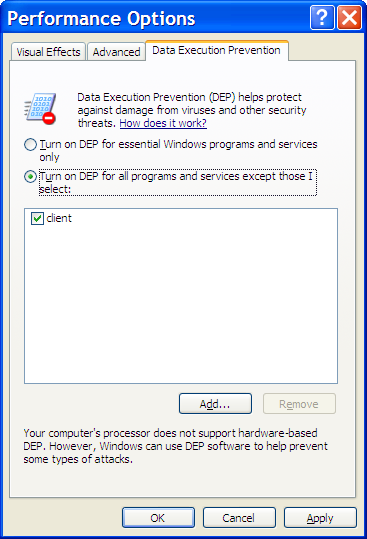 Select the item labeled “Turn on DEP for essential Windows programs and
services only”. This, effectively turns off DEP for everything else. Your image
viewer should now work.

“If you have a program you know is legitimate that
happens to cause DEP errors, you can add it to the list of exceptions.”

But as I said at the beginning, in my opinion, this isn’t what you should
do.

If you have a program you know is legitimate that happens to cause DEP
errors, you can add it to the list of exceptions.

As you can see in the image above, the default DEP setting is to “Turn on
DEP for all programs and services except those I select:”. So, a much better
way to get any legitimate program causing DEP errors to work again is to add
that program to the exception list.

Click on the Add… button. Now, locate the program’s
“.exe” file. I don’t happen to have IrfanView, but I’ll use Foxit Software’s
PDF reader as a random example: 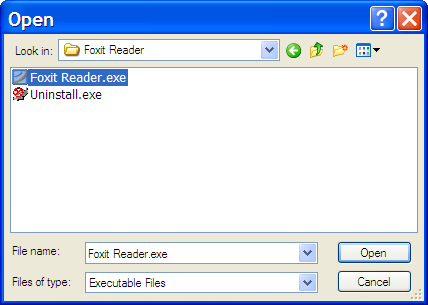 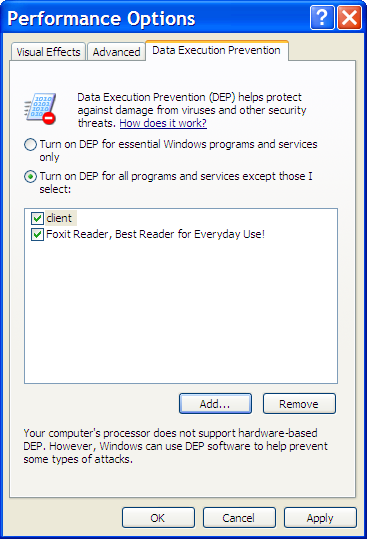 You can see that the program I specified has been added to the list of
exceptions. It will not be protected by DEP, but everything else in
your system will be.

That’s a much safer way to run.

180 comments on “How do I turn off Data Execution Prevention errors?”