I have a second CRT monitor which I want to use with my system. How do
I hook it up and what advantages can I derive from this hook-up? My
present OS is Windows-XP.

There are a couple of approaches to connecting more than one screen
to your display.

And you don’t even have to stop at two. Add three, four, or more
screens if you like.


The biggest limiting factor is typically where to plug it in. Your desktop computer likely has a place to plug in exactly one display device.

One option is to install a video card that supports more than one display, and that’s the approach I’ve taken. I ordered my current desktop machine with a ASUS 8600GT video card that provides two DVI outputs, to which I have my two 23″ displays connected.

Another approach is to simply install an additional video card. Years ago it used to be the case that only one video card could be installed and work at a time, but no more. You can install two, or more, and have each one provide the video output for a different device. In my case were I to install a second identical card I’d have the ability to drive four different monitors.

“The biggest limiting factor is typically where to plug it in.”

A more recent, and fascinating entry into the multiple-monitor market is a USB device that, when connected, provides an additional DVI/VGA output. The EVGA UV Plus is small and portable and a convenient way to inexpensively add additional displays (you can use more than one). The drawbacks I’ve seen so far in playing with one are that it is software based, and thus uses some CPU resources and requires additional drivers to be installed to manage your multiple displays. It also seemed to have an issue handling full-screen video.

Yet another approach is to use a product called MaxiVista. MaxiVista allows you to use another computer, and thus its monitor, as if it were an additional monitor connected to your PC. The classic case is using a laptop’s screen as an extension of your desktop computer’s display.

Speaking of laptops, most these days are already multiple-monitor capable. Not only do they have a built-in LCD display, but almost all laptops have a DVI or VGA connector for an external monitor. Through (often obscure) keystrokes and software settings, you can have your laptop display the same thing on both internal LCD and connected display, or treat them as a single multiple-monitor display. (The “obscure keystroke” I refer to above is often the laptops “Fn” key combined with one of the function keys to cycle through the possible display combinations. Confusion often arises as each switch can take a few seconds to actually happen, so be sure to wait each time you make a change to allow the hardware to catch up.)

Once you have your second (or third, or fourth) monitor plugged in, the Settings tab of Display Properties will actually show you both monitors, and allow you to arrange them and set the specific characteristic and options for each. 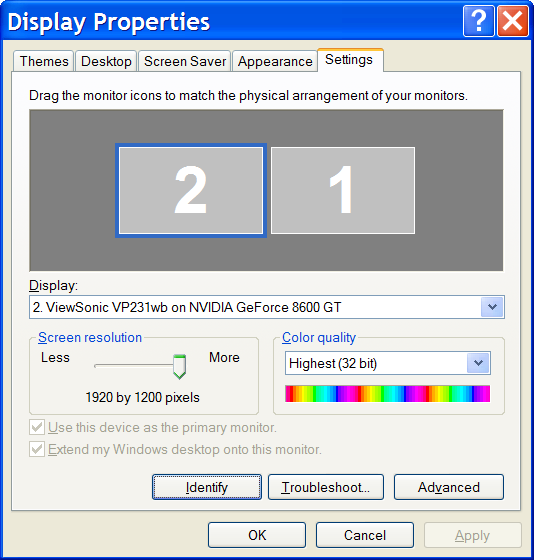 Having multiple monitors available can be a surprisingly powerful productivity enhancer. While, yes, I could do all my work on my laptop’s single screen, I’m actually more comfortable if I’m going to work on something for a longer period of time behind my desktop with its dual screen configuration.

I’m so much more comfortable that I’m likely to add a third display soon.

12 comments on “How do I set up a system with more than one screen?”